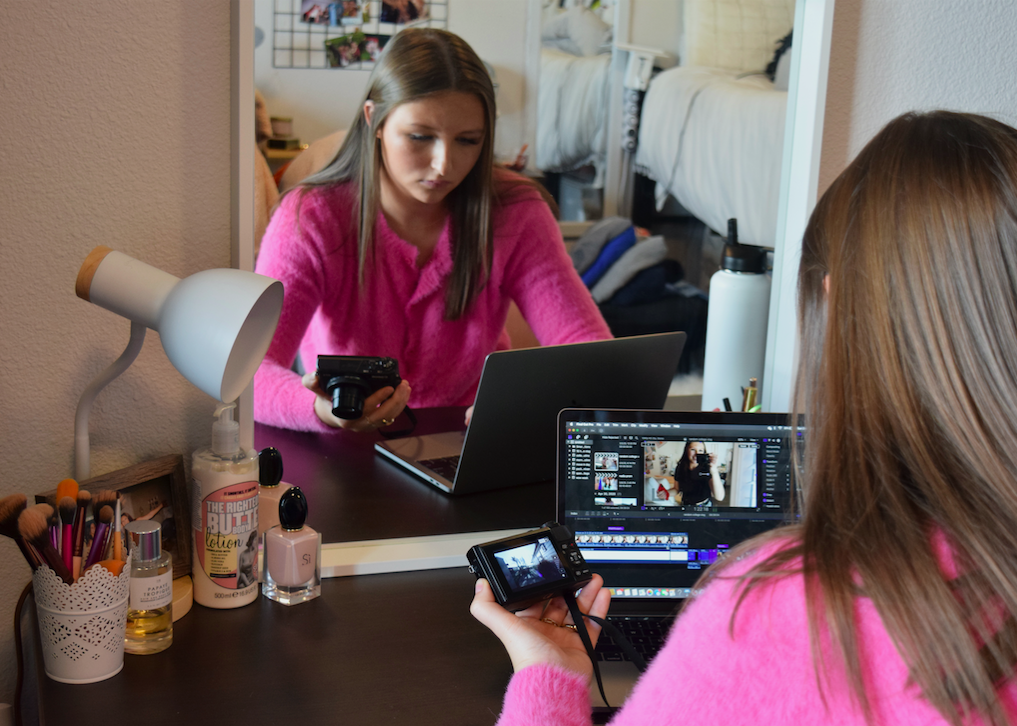 Every week, our team tasked ourselves with telling stories that would interest, excite or educate our fellow students. In our final two weeks, we aimed to do it once more—this time, by telling the stories of student influencers.

Yes, you heard that right: student influencers. These college students with a large social media following, whether it be on Instagram or Youtube, are popping up across college campuses. Cal Poly is no exception. We wanted to know why these student influencers got their start, and how they became so successful. So, with Graciella tackling word, Christina producing audio and video, Cydney taking on interactivity, and finally, myself on strategy and engagement, we set out to tell these stories. We set up three initial interviews to get started: Kristina Johnson, Sophia Shapiro and Sam Snowden.

Our team initially thought we would hear interesting stories about sponsorships, partnerships and paychecks from their platforms. What we found instead is that none of the influencers we spoke to were actually in it for any of that. Instead, their platforms are a means of being their authentic selves. In fact, many of them created their platforms with the intent of encouraging others — not the allure of sponsorship opportunities. Kristina Johnson, for example, has more than 27,000 subscribers on Youtube with videos achieving more than one million views. Johnson has several sponsorships and partners with brands to advertise on her channel from time to time. However, that isn’t why she got her start.

Johnson insisted that she started her channel to capture memories with friends. She was shocked when, after seven months of not getting many views, one of her videos went viral. She gained thousands of subscribers over night, launching her into “influencer” status. What was required of her to get her to that point? Equipment? Sure. Time? Of course. But what was most important, according to Johnson, was her authenticity, something she has kept front and center of her content.

This authenticity is palpable to those around her. “Shooting the video was a challenge at first because I wasn’t sure who should be the source featured in it, but after conducting and filming the interviews, it was clear that Kristina showed a lot of personality and emotion, which made for great footage,” Christina Arthur, the team member tasked with audio and video, said.

Ironically, our other sources all said the same thing in regards to authenticity. Sophia Shapiro started her page as a way to encourage others recovering from eating disorders, something she struggled with herself. Sam Snowden’s love for creating inspired his channel, where he aims to be completely himself without concern for what others will think — a mission that has led to a blossoming merchandise business with the slogan “Create More.” Their motives were not what we anticipated.

“The most interesting part about this reporting process was learning the real reason why influencers do what they do,” Cydney Melton, who was in charge of our story’s interactive elements, said. “It was refreshing to learn a deeper side to a profession that is otherwise misunderstood or not taken seriously.”

Not only did our team learn more about influencers, but we learned more about our own capabilities. As each of us tackled a different part of the story, we were challenged to use our knowledge from time as journalism students.

“I was really nervous to write the feature story because I haven’t written in that style in a while, Graciella Bragg said. “Looking back I think I stressed myself out way more than I should have. I met with Brady to get feedback as well as my group members and I am really proud of the final piece!”

The experience certainly pushed us out of our comfort zone. It also served as a really sentimental opportunity to use all we’ve learned as journalism students. Our finished product is a great display of our knowledge, but most importantly, a piece of storytelling that gives insight into students’ lives.