Out of all the groups, ours has always had the most difficulty coming up with story ideas. We decided to fall back on to something that we were familiar with: local politics. After covering the San Luis Obispo Mayoral race we all had a newfound interest in the politics of our college town. This time we focused on Aaron Gomez, SLO’s young, new and cute City Councilman.

Luck for us we easily contacted Aaron’s campaign event coordinator, Tyson Maulhardt, after getting his phone number from our instructor. I called Tyson and we set up an interview with him and Aaron for Friday morning at the coffee shop Kreuzbergs downtown.

We interviewed Tyson first while we waited for Aaron to arrive from a meeting. He was young, energetic and excited for the interview. Dani started off by asking him about why Aaron got involved in local politics and their campaign. Then Caitlyn asked about what events they did for the campaign and what events they are planning for while Aaron is in office. Tyson left for another meeting when Aaron arrived. Maddie set him up with a lav mic and we hit the ground running with all of us asking questions. It felt more like a conversation than an interview. 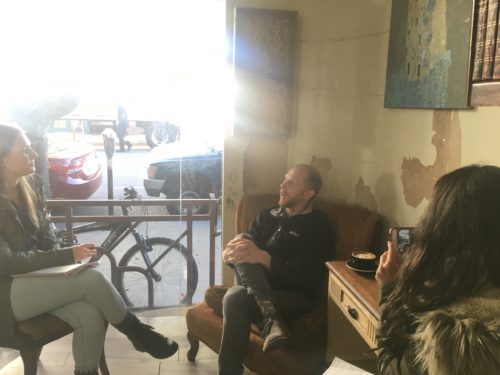 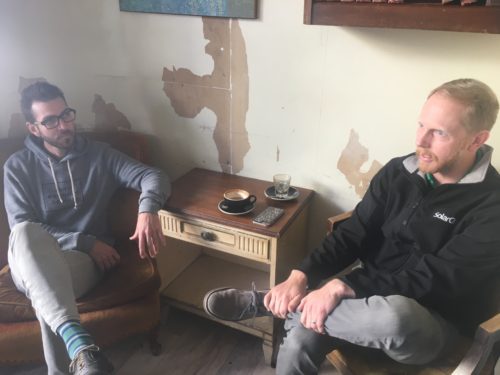 Aaron was nothing like I expected. Being under forty and already getting a jump on his political career I expected him to be outgoing and overly ambitious, trying to prove himself. Instead he was calm and quiet. He listened intently to our questions and never interrupted us. When he answered his answers we long and elegant.

The best way to explain his views is that he looks at everything as a big picture. He doesn’t get hung up on little problems, instead he sees how everything is connected. A great example of this is when we asked him about the SLO housing crisis and his thoughts about the push for more on campus housing.

“It’s not that students are the issue — it’s the fact that we ourselves, as a city, have not grown either. We’re trying to put more and more people into the same areas. It will help having more on-campus housing, but Cal Poly isn’t the problem. Everybody has grown and we haven’t built housing to accommodate that growth on any standpoint,” Aaron said.

This is such a different approach to the housing crisis than Heidi Harmon and Jan Marx gave us. They told us they want to work with Cal Poly to build more on campus housing and put students on campus. Aaron takes a different stance seeing that the student population isn’t the only problem.

After the interview Caitlyn, Dani, Maddie, and I walked down to Aaron’s small jewelry store The Golden Concept to see his business. We met his brother who was working on jewelry and talk to the sales associate about Aaron’s dad founding the store and coming up with the name.

Bump in the Road

The only problem we experienced was when Maddie discovered on Monday that her SD card broke and she lost all of her footage from the interview. I quickly texted Aaron and explained the situation and he was happy to sit for another interview. Because Maddie only need to make a couple minute video we didn’t need to keep him for long. They met again at Kreuzbergs for 15 minutes and the problem was solved.

“I really loved meeting Aaron and getting to hear his views on everything from the housing crisis to sustainability. He is a very interesting person and I felt like I could keep talking to him and asking questions for hours. The fact that he has grown up here and seen the city change is really beneficial and made him knowledgeable about SLO in a way that someone who hasn’t lived here their whole life can never be.” -Katie Stark

“I have never used or even heard of Thinglink before this quarter, so it was cool to learn how to use it and apply it to multimedia journalism. It was a fun component to create for this story because I got to talk to a lot of people in SLO who work for small businesses and hear what they think of Aaron Gomez. It was also really great talking to Aaron because he cares so much about SLO and he is very genuine. I know he will do great things for the city!” -Caitlyn Clausen

“I’m really happy our group chose to report on our local government this quarter. It was a great experience meeting and learning from various candidates– even voting in SLO’s election. I feel closer to my community!” -Dani Orlandi

“I definitely have the least amount of experience in broadcast so I struggled with this section the most. I also had some really bad luck with my SD card. We had a great interview with Aaron Friday after being assigned the story and when I went to go edit it on Monday I found out the microSd card was snapped in half and all of my video was deleted. Luckily I was able to reschedule a reshoot but it was hard because Aaron would give me incomplete answers to my questions since he had already answered them before.” -Maddie Reid