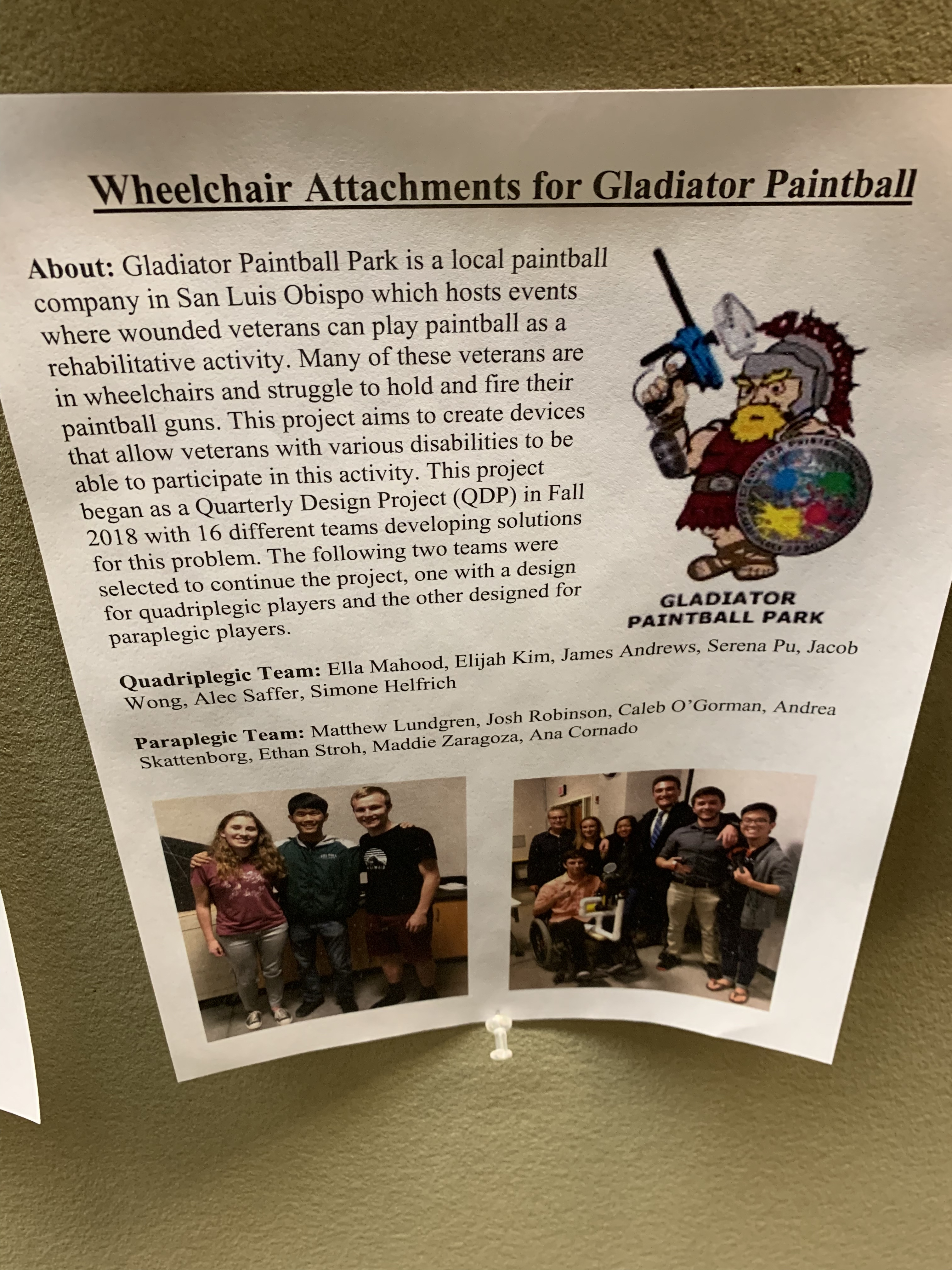 For our project, we decided to do a feature on SLO’s Gladiator paintball park. In addition to talking about the park, we wanted to highlight Cal Poly’s recent engagement with it, and discuss the QL+ (Quality of Life Plus) Program at Cal Poly.

We first got the idea a couple weeks ago, when our team member Nicholas Gonzales noticed this flyer while walking on campus.

We all agreed this had a lot of potential to be a really interesting story, as we had no idea this paintball park existed, let alone the QL+ involvement with it. We thought that not only should residents of SLO see the good Cal Poly students are doing, but so should other students that go here, who may want to join a program like this but haven’t heard about it.

At first, our struggle was finding a way for this story to be more centered around Cal Poly, as that is the topic requirement for these stories. To achieve this, we decided then to focus the story a bit more on the engineers behind the project, and their involvement with Gladiator Paintball, instead of just this event the company is putting on. I am glad ultimately that we went this route, because I feel like students will be very impressed with the accomplishments of their fellow mustangs, and are interested in topics like this.

“The QL+ teams are dedicated to their projects and it’s really cool to see how the concept comes into reality”, says Nicholas Gonzales about the students.

We initially set up an interview with Dave Biddle, the head owner and operator of Gladiator Paintball. He gave us a run-down on how he came up with the idea for the park initially, and how he later on realized he wanted to put on this event for disabled veterans. After speaking with him, he connected us with the students on the QL+ team, so we could talk to them personally and take a look at some of their designs.

“I liked the topic, the only problem was it was much less visual than I thought it would be because the paintball with vets isn’t actually going on yet”, says Jared Smith, who worked on the multimedia portion of this topic. This was an issue we ran into, as we felt like we had great content for a written story informing the public on the event, but not too much visual content to work with to really tie the story together. My teammate Taylor Powell, who was tasked with the written portion of the project this week, said she hopes we have a topic next week that is “a bit more visual media friendly”, as she will be tasked with collecting and editing the video portion of the piece.

Ultimately though, there were many different people who had a part in this story, we we were able to get creative and find effective visuals for the piece. I personally enjoyed this topic, as I felt a sense of pride in being able to share a school with students who were able to accomplish so much. “Everyone deserves a life without limitations.” says Harry Koos, student engineer. “People with disabilities deserve to do all the activities that other people get to do.”

Fellow mustangs, and residents of SLO, we are in great company with people and programs like this around us!