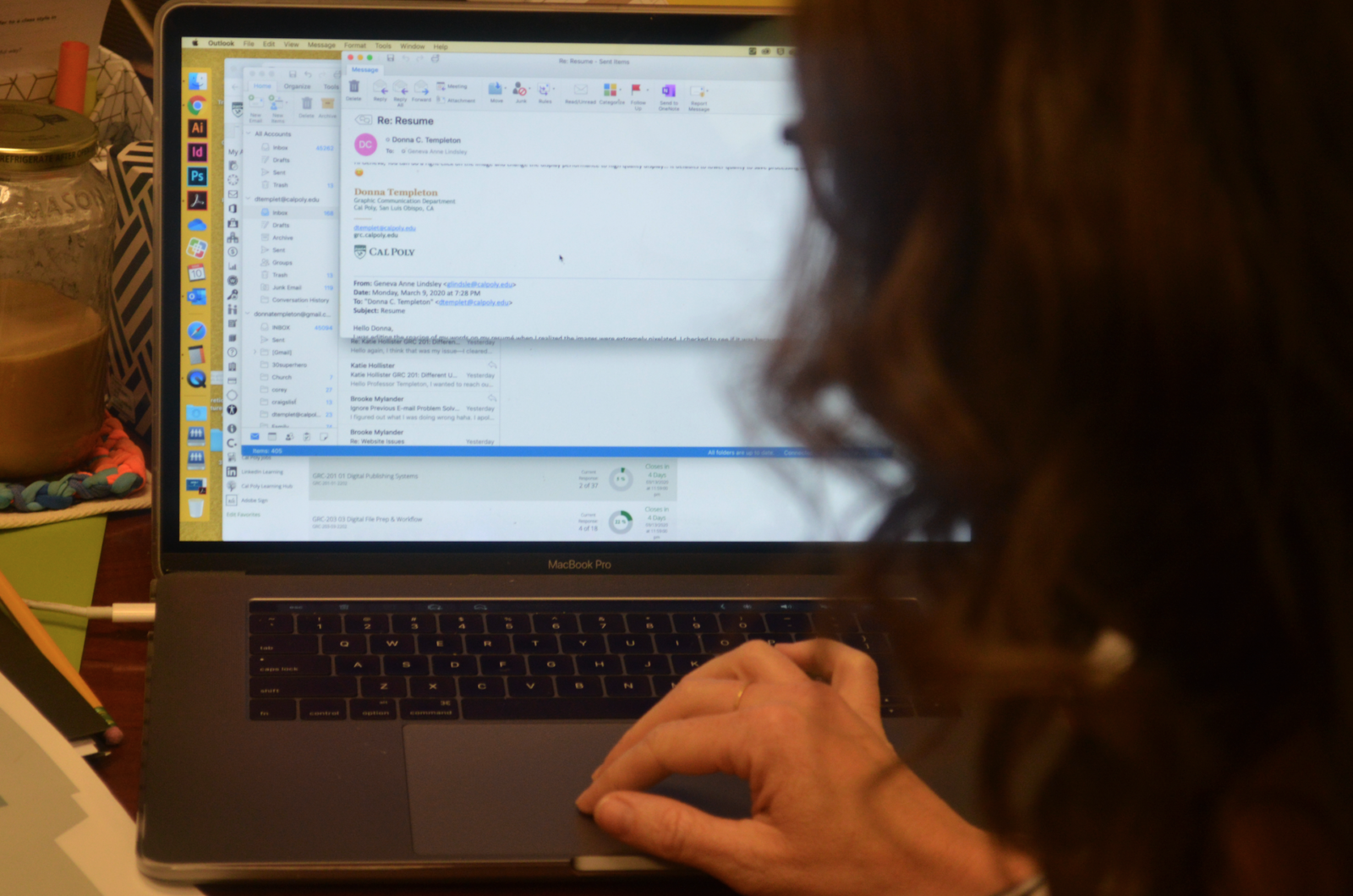 Remember when Cal Poly launched its rebrand around this time last year? Exactly. How could you forget the controversial new logo? As we approach the one year anniversary of the rebrand launch, Cal Poly’s University Marketing has been making more marketing materials to coincide with the new logo and color theme that debuted in April 2019. One of the recent resources created around Cal Poly’s new brand is an email signature template.

Prior to this recommended design, there was no standard Cal Poly email signature. Faculty and staff made their own signatures and had no guidelines to follow. Now, Cal Poly employees can follow a step-by-step tutorial to customize and implement the new email signature to their email account. The template provides a specific font and color for a faculty member’s name, pronouns, professional or academic title, and college/division or department and is followed by the Cal Poly logo.

At first, my team and I assumed this story would be simple. People had a lot to say about the new logo and initial branding materials when they were released. Why wouldn’t this have the same or similar reaction? Boy, were we wrong.

Our immediate angle of interest was to investigate the previous email signatures used by faculty and staff and ask a graphic communication and marketing professor what they think of this new, consistent email signature in terms of design and professionalism. This was harder to do than we anticipated.

“I think this was the most difficult project we’ve had yet. We had trouble getting a variety of sources to talk to us about the changes.” Charissa Rotkosky, assigned to the position of word, said.

After a week of trying to find sources, we were able to talk to Donna Templeton, a graphic communication professor at Cal Poly that currently teaches GrC 318, Digital Typography for Web and Print. She gave great insight on how professors normally go about the nature of email signatures and how this change could be effective.

“People don’t know what fonts to choose, what typefaces to choose, so being given a direction and some guides is a benefit to our entire university to give it a more prestigious look.” Templeton said.

With one interview down, we thought we were in good shape. But with no response from University Marketing and an email regarding ADA compliance that was passed on to the Media Relations Director, Matt Lazier, we were starting to panic. And to add to that, anyone we were able to get in contact with didn’t seem to care.

“It was tough trying to find a captivating angle on this story because there was not a lot of emotional appeal with it.” Scott Field, in charge of audio and video, said.

Luckily, we were able to find a staff member, Velanche Stewart, who hadn’t heard of the new email signature and was willing to be recorded as he attempted to follow to email signature instructions. Stewart was a great addition to our story, especially in audio and video, because when even he, who is the Equipment Specialist and Information Technology Consultant in the Journalism Department, struggled to read and interpret the information it proved that the guidelines aren’t as easy to follow as they are made out to be.

Overall, we fought against all odds (including coronavirus) to bring this story to fruition. But, at the end of the day, we made it work and were able to produce content for all four positions.

“In the end I think we still accomplished our goal of putting together a compelling story.” Kallyn Hobmann, responsible for the interactive portion of the story, said.