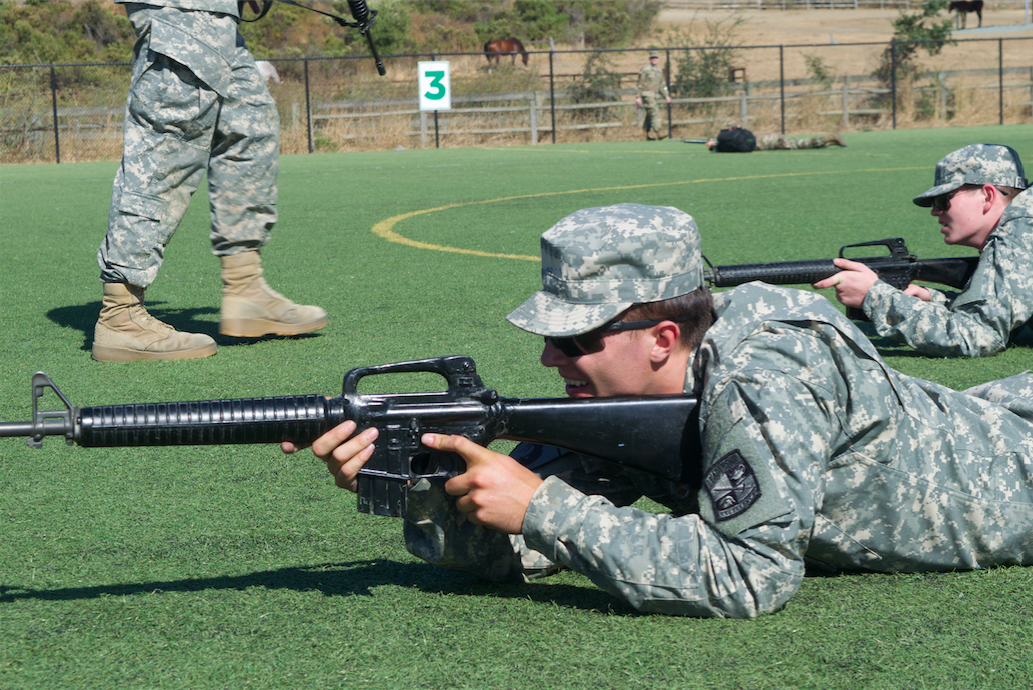 When people with similar ideas come together, it’s easy to establish a goal. On the first day our project was assigned (and our group was meeting for the first time) Camilla Corcuera suggested mental health and the military and Emily Hillsinger suggested a feature on ROTC students. Our group combined the idea and decided our project would be about ROTC: mental health, day-in-the-life and misconceptions.

“When we decided we were going to do a project about ROTC I had a big worry that no one in the program would want to talk with us. I thought it would be all governmental hush-hush. But that turned out to be the exact opposite. We got to attend a few ROTC trainings and each time the cadets were so respectful and engaging, proud of their program and peers, and willing to share their stories,” says Emily Hillsinger.

We did a majority of our filming and interviews on the Thursday of the first week of the project. That day was a long day for all of us, which helped us understand the sometimes rigorous schedule of ROTC students. We joined them for the 7 a.m. physical training (called “PT”), stopped into a military science class at 11 a.m., and then joined them out at the lower sports complex at 2 p.m. to watch their field training.

“The Mentality of the ROTC members we’ve been able to talk to is really inspiring. I had a completely different view, not negative, but I’ve gained a level of respect for those students,” says Carly Quinn.

The more we got a chance to meet cadets in the ROTC program, the more we realized that they are students just like us. The cadets we interviewed explained that everyone puts academics first and that the instructors understand this. Academics comes first, ROTC comes second. We went into this project knowing close to nothing about what ROTC is like and by having the opportunity to really get to know the people in the program our misconceptions melted away.

“This project gave me insight on the ROTC, a topic which carried several misconceptions and stereotypes in my mind. All the cadets, cadre and alumni were so willing and helpful to share their stories. It was fascinating because no background was the same, yet these students shared the same discipline and moral. That’s what journalism can provide you insight and exposure to a life or topic you have no idea about prior,” says Camilla Corcuera.

We also learned that most students on campus have misconceptions or misunderstandings about ROTC as well. For example, we met with Cadet Micah Maule and asked him what was the craziest question he has ever gotten was. Maule says, “One time during freshman year I was doing laundry and was in uniform and someone came up to me and asked me if I had ever killed someone”. This is when our topic really became important to us. If we can help explain ROTC accurately to a non-military-savvy audience, people will no longer have these misconceptions.

“I would say doing our first project on the ROTC has been extremely rewarding as learning more about the day to day lives of their members as well as their backgrounds has been enlightening. Ultimately, learning more about Cal Poly’s ROTC program specifically has given me a lot of respect for the program overall, staff members and the students that make the organization so great,” Hasan Sher Iqbal says.

We really enjoyed working with the Cal Poly ROTC program and hope our project reflects all that we have learned and hope that a reader may be inspired to go up to a ROTC cadet, ask questions and really get to know their fellow students.