With one project under our belt, going into project two my partner Megan Deegan and I felt a little more prepared about how to go about the process. We somehow adapted to the virtual world that we now live in. The idea of communication being done entirely on our phones and computers had become normal and we had a better understanding of how to successfully complete our next profile.

For this second story, we were intrigued by the stories of incoming college freshmen. We were curious about what thoughts were running through these students’ heads and how they were handling a constant changing and updating of their future. Being that Megan was the role of video this time around, she reached out to an old friend of hers in her hometown who will be attending Cal Poly in the Fall to see if he would be interested in us doing a story on him. Sure enough Nick Segovia, a recent high school grad and soon to be Cal Poly student said yes and shared with us his excitement for the next chapter of life.

“I’ve always been excited to leave my house and go explore something new,” he said, “so I’ve been looking forward to this for a while, which makes this whole coronavirus thing kinda irritating, especially just not knowing if you are gonna go for sure.”

Since we had our tech knowledge brushed up and felt that we had adapted to the virtual, Zoom world that we lived in, we entered the interview with a strong confidence. We had our questions prepared and had gone over what we wanted the interview to be like prior. I had informed Megan of my previous experience doing the video and having her on Facetime during the interview. I explained it was crucial to mute the computer so that any background noise from the other person’s screen, the little rectangle that they live in, wouldn’t disrupt the interview you were conducting. She completely agreed, so when it came to the real deal interview we felt confident and prepared.

As I popped up on the screen for the interview, I introduced myself to Nick and went over a game plan with Megan. She set up the camera and said she would be muting me to start the interview. I sat on my side of the screen watching it begin but realized that I was not hearing words, I was only watching mouths move. Being the technologically challenged person that I am, I tried to figure out what could have been wrong on my end. I texted Megan saying that I couldn’t hear what they were saying and didn’t want to say anything out loud just in case my microphone was still on, on their end. From silently watching the interview, I could tell it was going well and the last thing I wanted to do was interrupt. So I sat there and watched, wondering what was being asked and answered and realizing how hilarious the entire situation was.

Eventually Megan finished asking questions and suddenly I could hear her again. She realized that she had accidentally muted herself instead of me and we all just laughed. We had completed the interview and got some great footage and responses, I just didn’t hear it in real time. The entire experience doing this project was great, we got to learn a lot about what it is like to be an incoming college student right now, and got to provide Nick Segovia with the inside scoop about the dorms and life in SLO.

“It’s hilarious that we made sure to be so prepared for the interview and then that happened. I am really happy that we got to talk with Nick and talk to him about how exciting this next chapter at Cal Poly will be for him,” said Deegan. 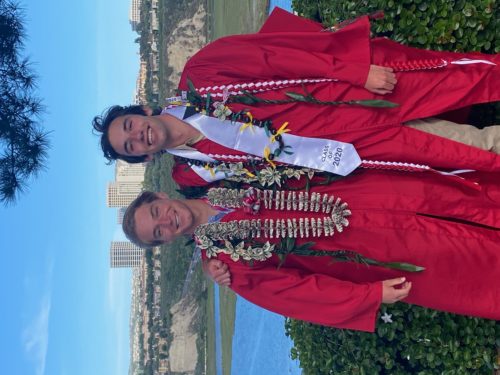 I guess what I got from this project overall was just the fact that we are all learning how to adjust to the new normal in all that we are doing, especially in school and work. Experiencing those technical difficulties and understanding the struggles that can come up when we aren’t able to conversate in person is frequent but all we can really do is laugh and learn from each experience.