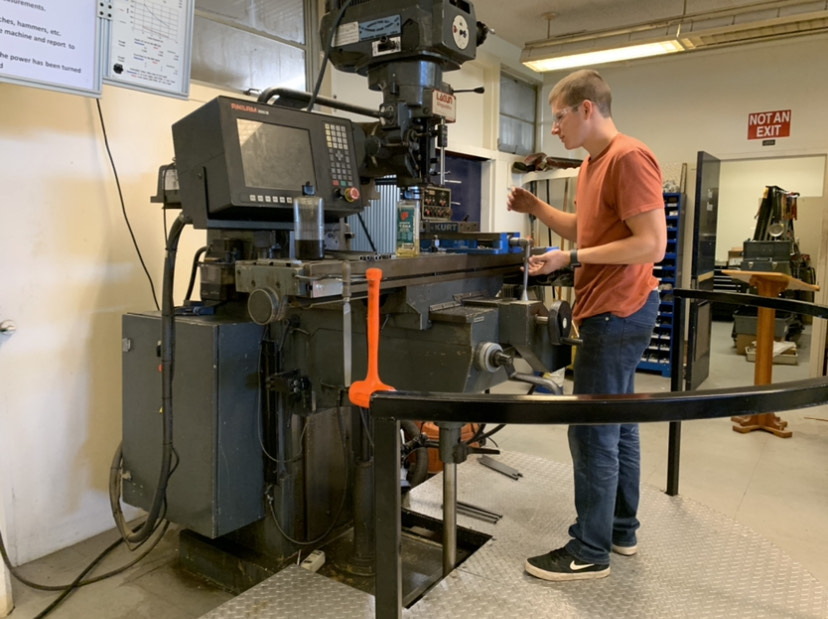 Like many journalism students, I have spent the last three years of my life in the College of Liberal Arts bubble. It’s rare for me to venture outside the confines of building 26, my safe space. Even though journalism classes require me and my peers to look for stories in other parts of campus, covering mostly politics has allowed me to stay well within my comfort zone, allowing me to rely on people I have met through Mock Trial and my Political Science minor.  This quarter has been a completely different story in large part due to senior media practicum. Making decisions as a group about which stories to cover, has forced me to explore different parts of Campus and get to know other members of the Cal Poly community.

The past two weeks have been particularly eye-opening, as me and my teammates looked into the Industrial Technology and Packaging (ITP) capstone course, ITP 467.  This class is filled with daunting tasks, requiring students to work as a team to come up with a product, design it, fund it, and then build and sell 100 units. “The amount of work they have to do for this class is crazy. I get overwhelmed just thinking about it,” group member Jayna Dunning said.

This quarter the class is made up of three different teams, each of which are working on their own product.  The teams, A La Cart, Hitch Locker and Herban Gardens, are all in the production phase where they are creating sellable units of their product. Third year ITP major Matt Appell said his team started with 120 product ideas before settling on Herban Garden, an indoor herb garden. Although Appell said he expected to be living at the lab and developing close friendships with teammates, he also told us that the class has been more difficult than he anticipated.

“I knew it was going to be hard and I expected it to be challenging, but I really had no idea kinda what I was getting into and in the sense of  actually designing, manufacturing, and finally really selling units of $130 to people that I don’t know. And that’s been a challenge, but it’s been a great learning experience,” Appell said.

The students of ITP 467 and their professor Jim Bentley were extremely helpful in helping us to understand the class and collect the information and footage we needed to complete our project.  They gave us protective eyewear and showed me and my teammates around their extensive production lab. As we walked through they pointed out pieces of equipment they have been using to create their projects. We were awestruck when they told us some of the machines were worth hundreds of thousands of dollars (In our department we can’t even afford computers that work).

“Getting to see the lab was so cool. I never would have known stuff like this was going on at Cal Poly if we weren’t covering it,” group member Kelsey Luvisa said.

For me and both my teammates observing and speaking with participants in ITP 467 gave us new insight into what the Cal Poly experience is like for people in other majors. I know I for one will think twice before I complain about staying at the journalism building to edit a project. Now I can look at the glass as half full and say at least I’m not pulling an all-nighter on campus like my peers in ITP 467.