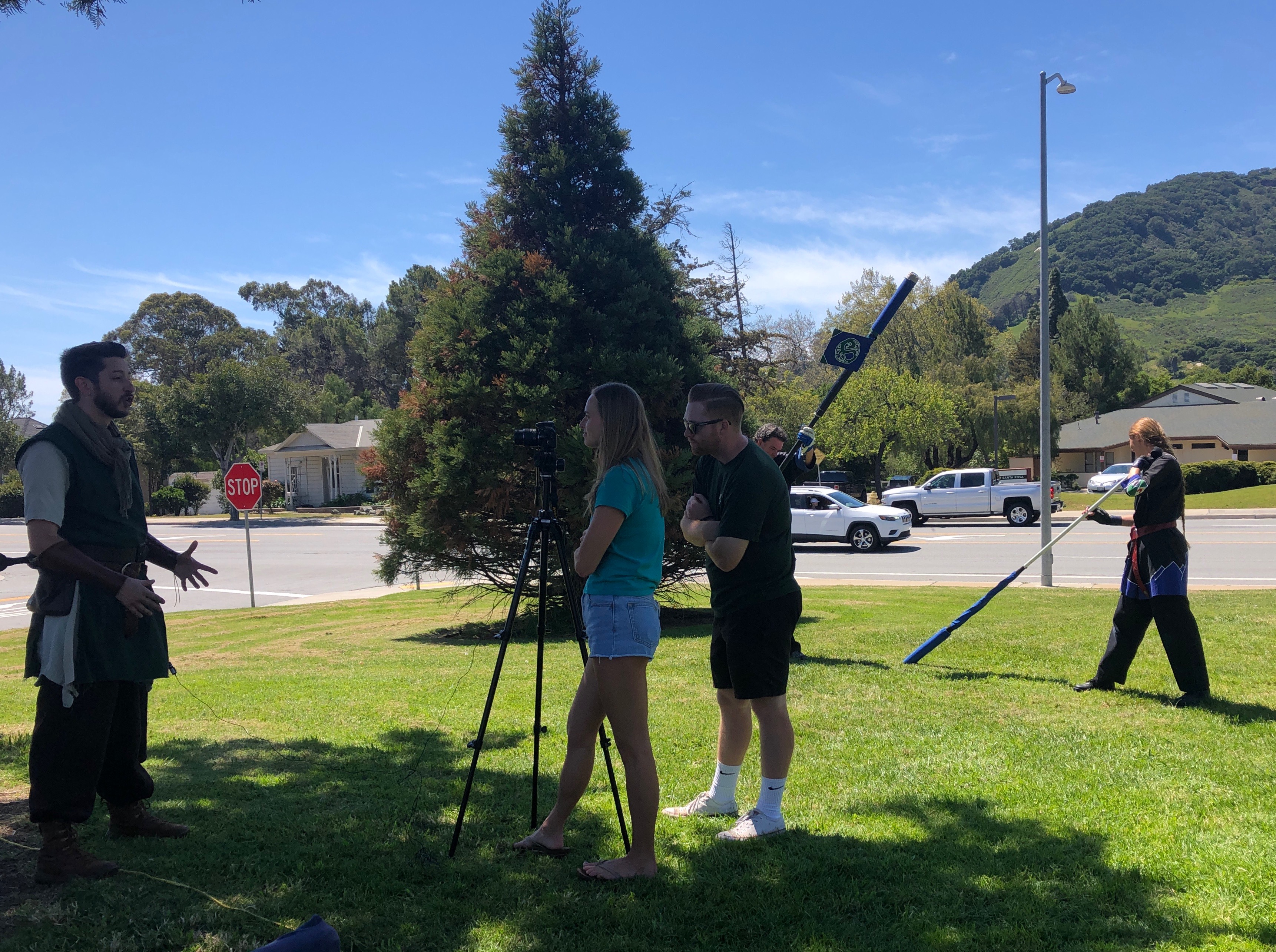 I don’t think any of us really knew what to expect when we pulled up to Santa Rosa Park on a sunny Saturday. In the past, we had each individually passed by and seen the group of medieval costume-clad San Luis Obispo locals with foam swords and shields in hand. This time, we would become fully immersed in the subculture and hobby that is live action role play, better known as LARP.

It all started when multimedia journalist Evan Van Beek explained to the group that in a previous class, he had tried to cover the local LARP group, but the story eventually fell through. What did remain, however, were his contacts from within the local LARP group, meaning we had some real potential for a story. Everyone in the group lit up with excitement for this topic and immediately started brainstorming all of the different ways we could creatively cover the story.

After doing some background research, we found that the local LARP group goes by The Seven Sleeping Dragons, named after the renowned Seven Sisters mountain range in San Luis Obispo. They are part of a larger organization called Amtgard, an international non-profit dedicated to medieval combat and roleplay. The Seven Sleeping Dragons originated as a Cal Poly club, but as the members graduated and still played regularly, they moved off-campus to Santa Rosa Park. Some members have 20-plus years of experience while others have only just picked up a sword within the last couple weeks. No matter who you are or how much experience you have, The Seven Sleeping Dragons encourage you to at least try it once.

Our main contact from within the local LARP group was Larry Pena, a San Luis Obispo community member who’s day job is editing the Cal Poly Magazine. He was happy to help us with the story on one condition: each reporter attending the Saturday afternoon battle had to try their hand at LARP.

When we arrived at Santa Rosa Park, a small group of players stood in a circle stretching their muscles and preparing their weapons. Fay, the monarch of the group, didn’t waste any time before handing us waivers and reinforcing the fact that we could only report on this story if we tried LARP for ourselves. Multimedia journalists Anna George, Jason Amberg and Vanbeek and I signed waivers, picked a sword from the loaner collection and listened closely to Fay’s exclamation of the rules of LARP.

“Headshots are not allowed, but they do happen,” Fay said.

We all reluctantly glanced at each other. We were actually going to hit people with foam swords… and get hit back.

After a brief introduction to LARP, Fay invited us to practice fighting her. She would only play defense and hold off on fighting back until we felt comfortable swinging a foam sword at another human being. Amberg was the first to put his LARP skills to the test.

He soon realized that yes: headshots do happen in LARP, even when your opponent is letting you win.

Later, Amberg got in costume, joined the full-scale battle, and got whacked by foam weapons. A lot.

“My favorite part of the whole experience was getting in there and being a part of the action with my own sword and shield,” Amberg said.

Next to give LARP a go was George.

George was quickly recognized for her incredible speed and agility on the LARP field.

We didn’t capture footage of Van Beek playing, but he did. And it was epic.

“I enjoyed watching them play and how complex some of their games were,” Van Beek said.

Once we all gave LARP a shot, Fay seemed to warm up to us a bit more. She explained that she had more than 15 years of LARP under her belt, it played a part in her decision to go to Cal Poly and she even met her fiance through The Seven Sleeping Dragons.

Other players we talked to shared a similar sentiment. LARP was a lot more than running around with foam weapons in Santa Rosa park. For some, it was a great way to get outside, exercise and be social. For others, through crafting weapons from scratch and hand-making elaborate costumes, LARP served as an important way to express creativity. Some brought their children and spouses along, making the Amtgard battle a family affair.

“Understanding who these people are and the community they have built was special,” George said.

Something that surprised us during the reporting process was the constant harassment The Seven Sleeping Dragons face. Not once or twice, but frequently, people shouted derogatory comments from their cars with the intent to embarrass or shame the LARP participants. Even more incredible, however, was the fact that none of the members seemed phased at all. They are proud of what they do and don’t need society’s approval to enjoy their hobby. That’s something everyone can learn from.