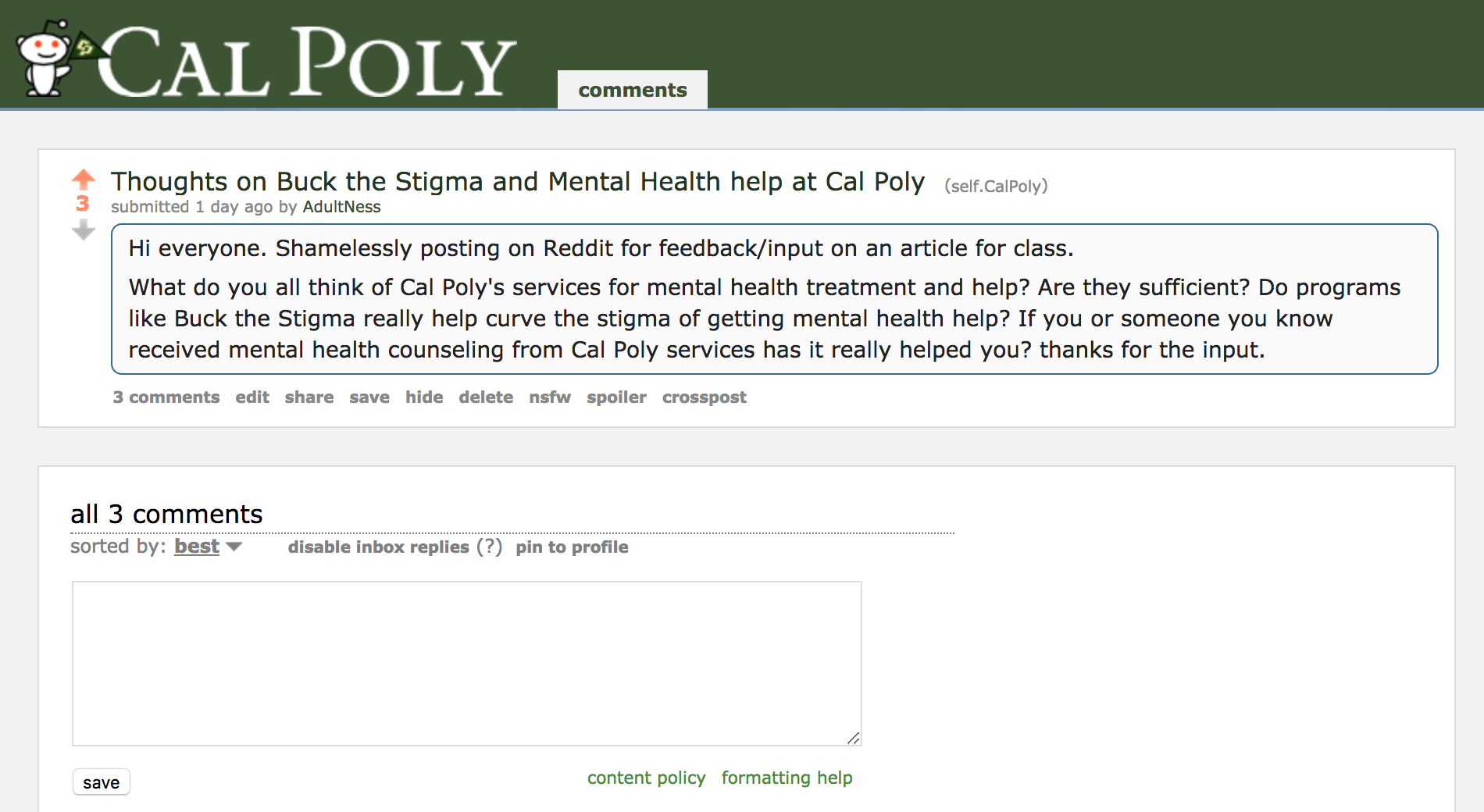 The initial impression that the group had going into our project was that the angle, story and sources would be relatively straightforward. What started out as a project highlighting the work behind Buck the Stigma and mental health assistance at Cal Poly changed directions drastically and near immediately as it became clear to us that the general consensus among the student body that mental health services at Cal Poly were, for the most part, lacking in depth, availability and effectiveness.

Once angles changed gears, we were able to gather potential sources quickly. As staff and student information are readily available, it was as simple as finding associates for Cal Poly’s number of mental health-related programs. While many of our desired potential sources — psychology professors for example — failed to get back to us, we found that reaching out to these sources earlier than during our previous project helped us out tremendously.

“I found that setting up interviews early on was a good decision because it made gave us more time to put our story together,” team member and journalism senior Spenser Judd said.

That pretty much sums up our experiences with sources. Likely due to our change in direction with our subject and better conceptualization of the project as compared to last time, our project’s sources truly made the project, providing valuable insight and great material.

That insight can be seen from one of the sources interviewed for our written word portion: Anita Notthoff.

“All of the organizations facilitated different conversations and had different roles yet held one common goal: to break the stigma around mental illness,” Notthhoff said.

She would also elaborate later that “stigma is the main reason people suffering from mental health issues don’t seek help.”

These perspectives provide valuable insight into the bigger picture of mental health and the purpose behind Cal Poly’s programs, whether they are effective or not.

“I found that our sources were willing to help a lot more this time around by being more responsive and that made our story better because of it,” Gracie said.

Gathering background information on our subject provided valuable insight as well. Much of this came from online sources on my end, such as this reddit post I made:

This generated a relatively high volume of thought-out and detailed responses, at least from r/CalPoly standards.

Background info was also compiled in my backgrounder:

These articles shed light on Cal Poly’s past with Buck the Stigma, mental health, and how things have changed very little in recent years. Nationwide reporting details the rise of mental health problems and stigma among college students, and how Cal Poly compares in dealing with these problems. These perspectives were valuable in crafting interview questions and writing out the article.

Once all the sources were interviewed, the bigger picture of Cal Poly’s problem with dealing with mental health issues among a rising trend of those issues nationwide came to our understanding and was crafted in our content.

Our video summed it up nicely.

As far as what the article will amount to, it’s hard to say. The general consensus among group members is that the project ended with much more coherence, efficiency, and value.

“I found the story this time around to be a lot more successful and came together in a very cohesive manner,” said group member and journalism senior Katie Peterson.