Before picking up this story, I had no idea that the Cal Poly Dairy unit existed. The first week of quarantine, I saw an old friend from high school’s instagram post: It pictured her getting “kissed” by a cow. 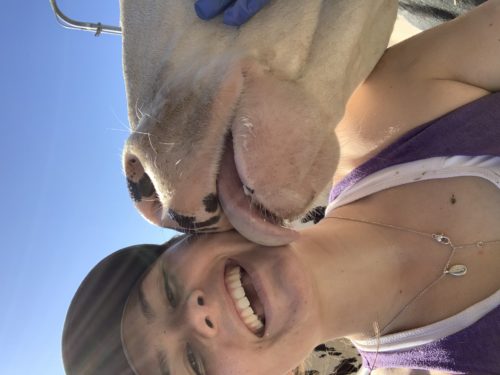 After a quick text to a phone number I hoped was still hers, I learned that Deanna Payan was one of the essential workers who milks cows at the Cal Poly Dairy Unit. Just like that, I had found my final story subject for my last journalism class.

After the interview, I learned three things: 1. The Cal Poly Diary Unit is a full functioning, student run dairy with over 300 cattle. 2. The job of a milker is hard, with unpredictable events and early (and I mean early) work hours. And 3. I don’t think I could meet anyone that loves their job more than Deanna Payan loves her job at the Dairy Unit.

She loves the cows, her community of 25 essential workers that take turns milking at the Dairy Unit, and she even loves the smell of cow poop in the morning, deeming it a “nostalgic” smell. 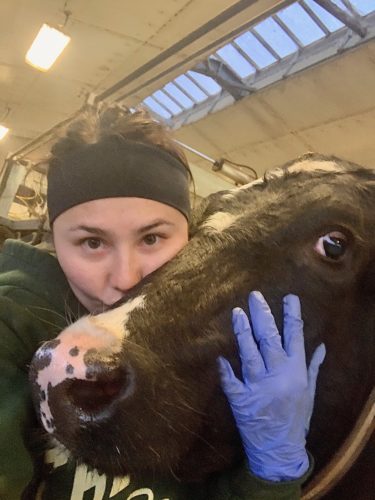 Overall I was so grateful for this story to be my last at Cal Poly, as I “graduate” in just a couple days. It really made me appreciate the little things in life, like Payan does at the Dairy Unit.

Some fun facts behind the story:

“She’s extremely skittish. She does not like people but for some reason, I love her and I pet her every time she comes. And the other day, I was walking back down the traveled pushing her pin back. And she walked next to me the whole time and didn’t run away. So we’re making progress.”