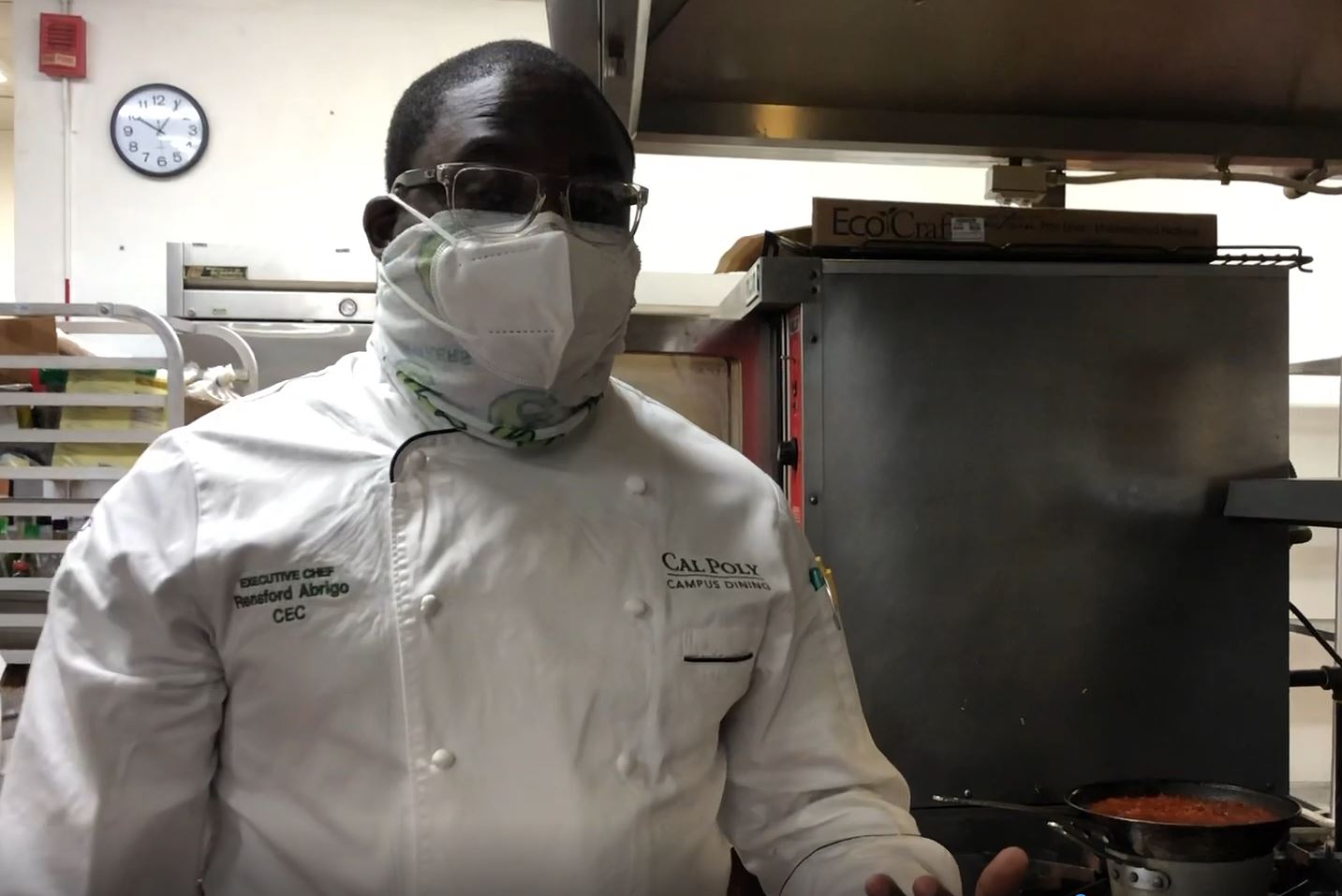 While I had worked for campus dining during my Freshman year, I didn’t have the pleasure of working under Executive Chef Rensford Abrigo. However, during our interview with the man who manages several of Cal Poly’s restaurants, I felt a strong connection with the executive chef.

When the COVID-19 pandemic was in its infant stages I took the opportunity to be with my family and quickly headed up to the bay area. That strong value I place on my own familial bonds is the reason I instantly connected with Abrigo. I saw a lot of my own father in him. As someone who felt like they weren’t necessarily supported by their own father, Abrigo strives to give his own children a multitude of opportunities to further their education.

“I really didn’t have much guidance from my dad. I grew up on an about 110-acre farm in Maryland,” Abrigo said. “And my dad was more into hands-on working, being at home, taking care of the farm, and those types of things. College was never something that my dad really pushed, so it was really on me to do my research and do my homework to figure out where I wanted to go. And I always said to myself “hey when I have the opportunity to have kids, if that ever comes, I really want to imprint on them the importance of a great education.”

Throughout the entirety of our interview through Zoom, Abrigo and his personality shined through as someone who loved to love. This was a man that was full of passion and had the drive to do the right thing in that world. And the times when that was the most obvious was when he would talk about his children. Despite his impressive accomplishments, from growing up on a farm, to joining the marine corps, to looking into colleges on his own to eventually becoming an executive chef in Las Vegas, Abrigo was not a man short of success. But the pride he took in that was dwarfed when he was talking about the accomplishments of his children.

“I wanted to take on that challenge of trying to be great. So I always told my son, “you know you’re great, but determine what you’re gonna do in life. If you want to be anything, start with your grades and you have every door be open for you.” And he’s really taking on that same challenge. He’s a much smarter and better student than I was so it’s awesome to see.”

And it was refreshing how open he was when talking about his work with campus dining and the safety precautions they had put in place. I was also surprised that despite the current pandemic, Cal Poly is still moving ahead with work on the construction of the new Vista Grande Dining Facility. But most reassuring was knowing that in the event that San Luis Obispo had to use the alternative care unit set up on campus, Rensford would be there to feed the workers and patients.

My partner Alison Epple worked under Abrigo and was the one to bring him onto this project. Abrigo saved us, as due to unforeseen circumstances we were unable to find a subject earlier.

“You can tell Rensford cares so much about the Cal Poly community,” Epple said. “He’s the perfect person to lead Campus Dining during this scary time.”