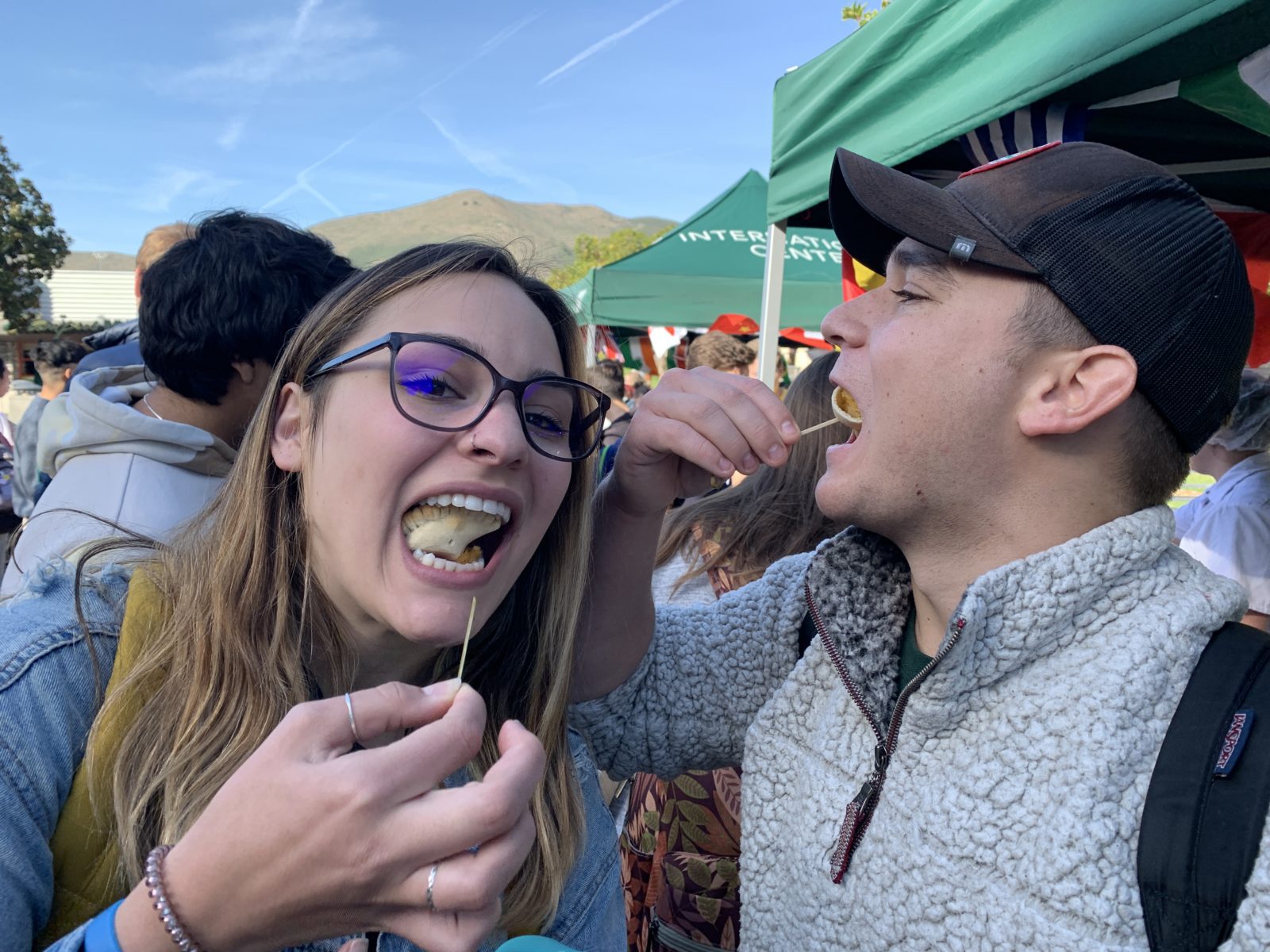 I won’t lie- our group struggled this week to generate ideas for our project. We sat in class on the first Monday and debated whether writing a story about tourism in Paso Robles would be feasible, considering none of us really wanted to commit to the 30 minute drive multiple times over the next two weeks.

Sabrina held our hands as we painfully scoured the web for anything interesting we could find (this project is coming to you in the middle of week five and six, so give us a break), until Jay stumbled upon Cal Poly’s very own Taste of the World event. It was even scheduled that week, so timeliness? Check.

After the initial excitement of FINALLY choosing a topic, we set about preparing to cover everything. I called and emailed the campus International Center, Food Science Department and students who were involved in the event or looking forward to attending.

When Taste of the World rolled around on Wednesday, we eagerly gathered outside of Campus Market and watched the swarm of hungry passersby gobble up every opportunity for free food. There were several tents, including one with displays and information about the International Center who hosted the event.

Brian, our Audio/Video genius of the week, set up his camera and talked to Cari Vanderkar, the director of the International Center. Our writer Natalie asked questions, while our Interactivity guru Jay munched on all the free international delicacies.

“I enjoyed eating the free food,” Jay said. “I believe that its nice that Cal Poly offers a way to shine light on many different cultures, especially through a fun event on campus.”

Aside from the food, the Chinese Student Association’s Lion Dance Team performed a traditional dance that involved a dragon eating a head of lettuce. (Dragons enjoy free food, too.)

Ever the film wizard, Brian not only filmed content at the event, but he also went behind the scenes and visited a food science class in which the students prepared the food.

“I enjoyed going into the class while they were prepping the food. It made for interesting video and interviews as the students were cooking,” Brian said. “I think going behind the scenes helped add some depth to this story.”

The star of the show was undoubtedly the food. Students whipped up European delicacies called pierogis, or cheese and potato stuffed dough. Spongy and sweet mochi cake was a frontrunner, as well as Spanish-style snickerdoodle cookies with an orange zest. Spam musubi is where everyone’s opinions differed; Natalia and Jay seemed to be fans, while I was not down for the salty canned meat. The jury is still out for Brian.

We talked to Spanish fourth year Paige McGill, who has studied abroad in Spain and is no stranger to diverse foods.

“I liked the informational signs and recipes, but i wish they also described where each food is traditionally eaten,” Paige said.

The International Center has hosted this event in past years, although there was not much media buzz about it this time around.

“I learned that the cultural center is doing more than I thought they were to get cultural fairs on campus, despite lack of advertisement for this,” Natalie said.

The only promotion for the event on Instagram was this post from the International Center a few weeks in advance.