We quickly realized that covering a beach clean-up is tired and cliche especially since we didn’t have a fresh angle. Beach clean-ups are wonderfully straight forward and provide gorgeous photography, but again it’s tired. Then, we tried to tackling recycling but figured we’d be drowning in information and, in turn, have a hard time narrowing down our focus. We might cover it later on when we are more quipped with extensive research. If we decided to cover recycling and the execution was shoddy, we’d only be contributing to the pile of mediocre or even inaccurate stories about recycling.  After twidling are thumbs and holding long, silent periods of eye contact with Professor Brady, journalism senior Naythan Bryant finally suggested covering a sports story. We, again, tried to get in over our heads by trying to do an investigative piece about the athletics department but admitted we’d only be given the run around if we tried to do an expose.

Finally, we settled on a light-hearted story about Cal Poly’s head swim coach, Tom Milich, retiring. Originally, we pitched profiling Tom and finding out who he is as a person. It had all the trappings of a heartwarming story; however, as Naythan, the writer of the story, started collecting interviews from several sources, including the coach and assistant coach, as well as the athletic director and swimmers on the team, he hit a snag. We eventually had to pivot and start writing about his accomplishments with the  ‘left the place better than he found it’ angle since he is a pretty straightforward person who offered brief answers.

“I really enjoyed getting to know Toms’s story and talking to others about how he’s impacted the swimming and diving program at Cal Poly. The interviews all went great and the story is going smoothly, I’m excited to see the finished result published in print and online,” Naythan admitted. 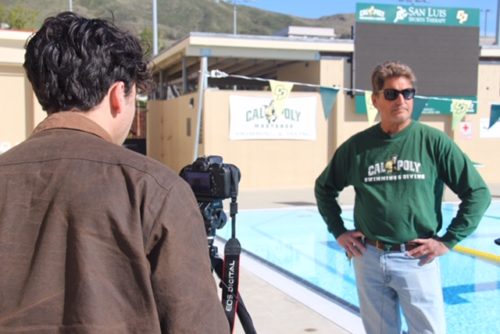 The video element was when we were able to throw out more creative ideas. We even threw around the idea of using go-pro footage of the pool. As the videographer, Jakob felt his role in the project was really to be the support. He worked closely with Nathan and Brooke in order to make sure that everything for the interviews was accounted for, including questions, photos, and videos. The subject of the article made it easy to get this, as the pool and the trophy case were very natural backgrounds for both Tom Milich and Amelia Feick, who were our main subjects for the video. “I also found the Mustang News guides to be really helpful for video editing and dialing in everything in Premiere so that it was neat and abided by MN style,” Jakob finally said.

Brooke found her grove with interactivity she went to the swim and dive seniors meet on Saturday where she got great photos of Tom in action and the swimmers competing. 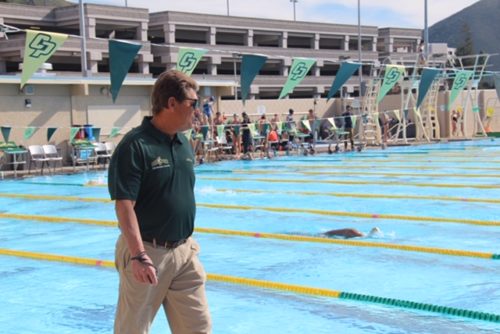 “I also tagged along to the Tom Milich main interview where I got the rest of my shots. This was beneficial because I turned one of his quotes into part of my infographic,” Brooke mentioned. This added a great element to her third interactivity element alongside the facts of his legacy. This was a great role for her because she was able to step out of her comfort zone getting different shot angles and then putting her design skills to use for the infographic. Luckily, Kyle Calzia is a great videographer because we are using his incredible video of a swimmer competing in action from the coolest angle!

As strategy and engagement, I usually downplayed my role, but I can finally liken my role to a puppeteer anxiously hoping the production doesn’t fall apart. It takes finesse to send out emails and make sure the rest of your team is prepped and loaded with useful insight before they go out. It’s not much, but it’s honest work. Honestly, I’m worried this behind the scenes look didn’t hit the mark, but hey that in itself is a behind the scenes look!