When deciding on a story to work on as a group for week 3, we were stumped. That was until someone said “how about the surfing goats?”. That had us a little stumped as well. We watched some videos on YouTube and without hesitation, wanted to make this our project. So for week 3 we decided to work on Dana and the surfing goats of Pismo Beach. No story has ever been done on this topic by Mustang News before.

Dana is a local celebrity in SLO County. You can spot him in his goat themed Prius, driving goats around or just hanging out with his goats at Pismo Beach. He also has a children’s book about his goats that is popular with kids from all over, not just SLO.

The first step was to get in touch with Dana, which proved to be harder than we anticipated. He is a busy person and setting up a time that worked for everyone to meet for an interview was not as easy as we hoped. The next step was finding a date, which also was not as easy as we had hoped due to conflicting schedules as well as the weather. We wanted to be able to do the interview at the beach and be able to record the goats actually surfing, and that required a nice day. Days and times just kept getting pushed back which was frustrating at times.

However, once we finally picked a day and time it turned out great. The weather was beautiful and the goats were out. They were friendly and ready to surf. Everyone from the group was able to make it to the shoot which made it super helpful in getting photos and videos from all angles and cameras. Everyone was able to help each other to make sure we could make every component of this story the best it could be. Our GoPro was not working however, so unfortunately we could not get any shots of actually surfing in the water, but everything still turned out okay.

One of our group members was actually able to go out and surf with Dana and got to experience what the goat does in the water. The goats just roam around the beach and a lot of people are familiar with them. They love to go up to anyone who has food and they will take it from you. They are very close to Dana and follow him. While he surfs with one goat, he ties the others up and they just hang out. People come pet them, take pictures, they are famous in Pismo.

“It was fun working on such a lighthearted story.” – Hannah

“I loved this story, it was fun and getting to work with the goats was really cool.” – Serena

“I was awesome getting to work on something so different and seeing the goat actually surf.” – Tasha 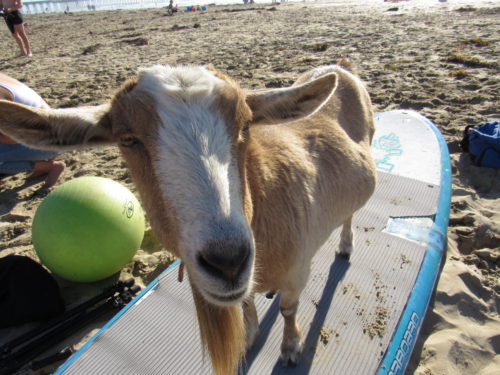