Now, substitute “a store in downtown San Luis Obispo” with “four students from Cal Poly” and you have the basic premise of our group’s experience with this story.

Tabata Gordillo, Jay Serrano, Kelly Martinez and I had a bit of a rocky start with our story. We had originally planned to cover JunkGirls, a store in downtown San Luis Obispo. The story had an important meaning and great potential for visual components. However, we weren’t able to conduct an interview for unexplained reasons.

“I think the hardest part of this process was having to pivot story ideas last minute,” journalism senior Kelly Martinez said. Once our first story idea dropped, we had to quickly come up with another. We were working on an unforgiving timeline that would’ve eaten us alive if we didn’t think fast.

Then, like Disney magic, two words came into Tabata’s head; party princess. One of my friends, Grace Trotta, dresses up as princesses and superheroes for children’s birthday parties and special events. I interviewed Grace previously for another class about her princess endeavors and knew she would be an amazing interview subject for this. 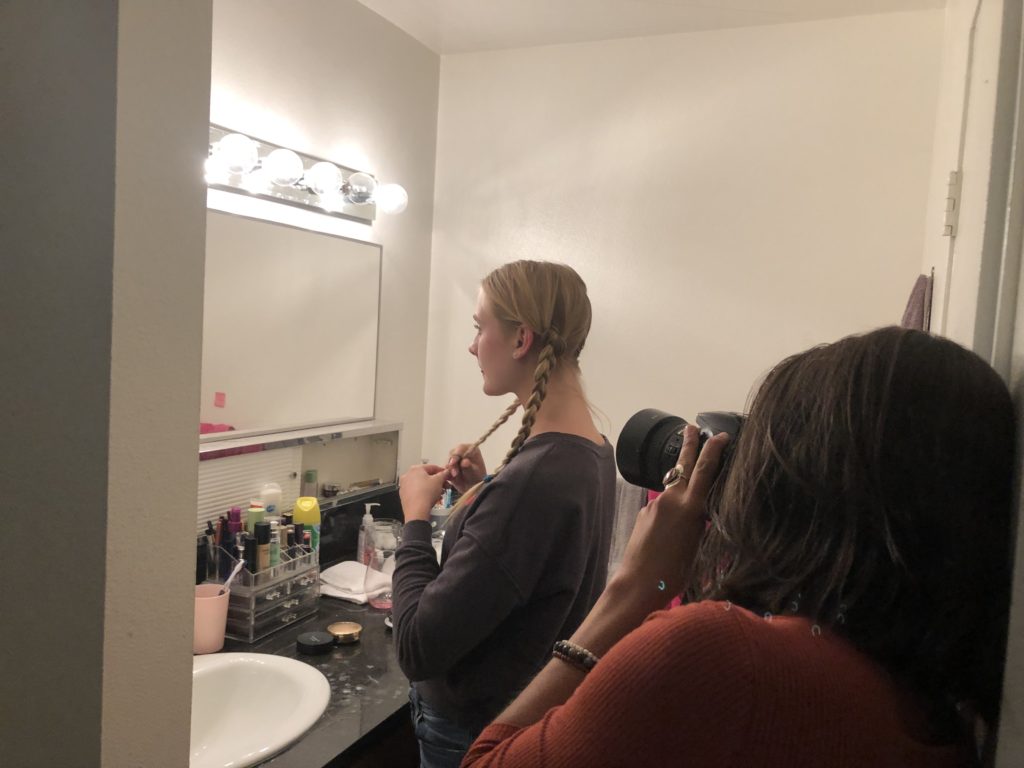 Grace is obsessed with Disney. I knew we could get amazing visuals for this story because the first time I went to her apartment, I couldn’t look anywhere without seeing Rapunzel or pink. When talking to my group members about Grace, I tried to encapsulate how much of a character Grace really is. I don’t think they fully understood until they met her.

We all went to Grace’s Disney-filled apartment to conduct the interview and see her transform from a Cal Poly student into Sleeping Beauty herself. Grace greeted us at the door, bare-faced and eager. We all went up to her room, where she casually propped herself on her pink duvet for the interview. Jay set up the camera, Kelly opened her notes, and it was interview time.

My group had asked me to attend the interview to help make Grace feel more comfortable. “I don’t think that will be a problem,” I said, “Grace is an actor. She’s more comfortable in front of the camera.”

Once Jay turned on the camera, words began to flow out of Grace’s mouth without care. Unlike her poised demeanor as a princess, Grace Trotta is unabashedly candid and unfiltered. The hilarious and heartfelt stories Grace told unintentionally created some trouble for Jay. “The hardest part for me was matching words to video,” journalism senior Jay Serrano begins. “Grace has a lot of interesting stories, but you can’t really use them in video well unless you’re there filming it – the b-roll will feel out of place.”

After the interview, Grace started putting on layers of make-up. “You have to absolutely cake your face in make-up,” sophomore communication studies major Grace Trotta explains. “Otherwise you’ll wash out and look like a potato. I’ve looked like a potato once or twice in my day.” Grace opens up the left side of her closet to unveil her princess costume closet.

The rest of her clothes are jammed to the right carelessly. The hand-sewn dresses, however, are neat and in order. “Some people buy Coachella tickets,” Grace says, “I buy $275 Elsa wigs.”

I think Grace’s take on party princesses made all of us think a bit more deeply about the profession. Princess narratives often include a passive, unrealistically gorgeous woman (by Western standards) who sits around and waits for a prince to save them. Grace, however, uses her role as a party princess to inform kids about topics like feminism and consent. When she dresses up as Cinderella, whose only claim to fame is losing her shoe at a party, she highlights the princess’ compassion and kindness. “I love how she uses this platform to educate kids about important issues,” journalism senior Tabata Gordillo said. “That’s definitely not in her job description, but it’s really important.” 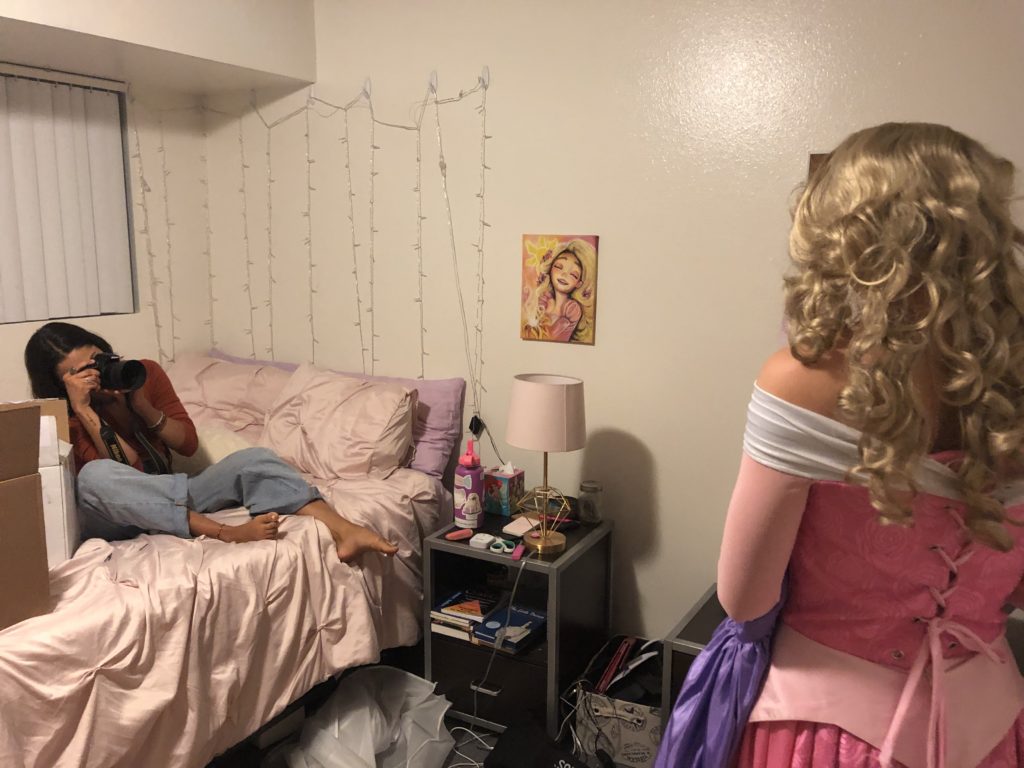 The interview was over and we all left the princess in her Valencia Apartments tower. When we pivoted to this idea, I thought that this story was going to be a bit of a fluffier piece. Who wouldn’t love to read a story or watch a video about a hilarious Cal Poly student dress up as Disney princesses? But Grace took it to a whole other level – which is why you should never underestimate a party princess.