Behind the Scenes: Flipping the Stigma, Autism at Cal Poly

We sat down on the first day our groups were assigned, some of us meeting for the first time, eagerly sharing story ideas we’ve brainstormed since our last class meeting. After a bit of dabbling with other story ideas, Emma said she was inspired by the Netflix show “Atypical”, a heartfelt story of a highschool boy with Autism. The show is filmed in a style where the viewer is following around the main character. So, we decided to try and imitate this idea, but make it local to our campus. Our group thought this was a really important story to tell: what’s life like here at Cal Poly for students on the Autism spectrum?

Our overarching goal of the story was to portray what life is like as a Cal Poly student who isn’t neuro-typical, meaning an individual who thinks in ways that are considered to be “normal” by the general population. We all agreed that much of the conversation about Autism centers around early childhood and adolescence, and far less involving college-aged individuals. Our early ideas were to do some sort of “day in the life” exposé, but that came with some roadblocks. The largest hurdle was trying to find someone willing to be followed around with a camera, for many people that would be a type of “outing” as autistic. We got in touch with Jenny Peterson, a Cal Poly Alumni who works as the connections coordinator for the DRC, and is on the Autism spectrum. She got us in touch with Katie Whelan, a third year mechanical engineering student, who was willing to let us interview her. Jenny also volunteered her time to be interviewed. From there, each team member was busy doing their own specific duties.

I began working on research, team coordination and general PR to see what the Cal Poly community wants to know about our topic. The most impactful of these reports was my backgrounder, where I surveyed to see if Mustang News and/or local news publications have ever done a story like this. The most poignant story I found was written in 2013, written craftfly by Aryn Sanderson. Sophie, our writer for this story, used this piece as a model for her own writing. Additionally, I used the power of social media to survey what the community wants to know about living with Autism at Cal Poly, and compiled it into a report for my team members to use as they move forward in their work.

Emma Withrow, our passionate video team member coordinated and filmed the interviews, is really happy about our work. Withrow recognized how special it was to work on this project, “I feel so honored to have gotten to share the story of these amazing individuals. The process of interviewing them, especially surrounding such a sensitive topic, was truly eye opening. I am so glad we get to share some light on students at Cal Poly on the Autism spectrum.” Emma’s passion for broadcast really brought our ideas for this story to light. 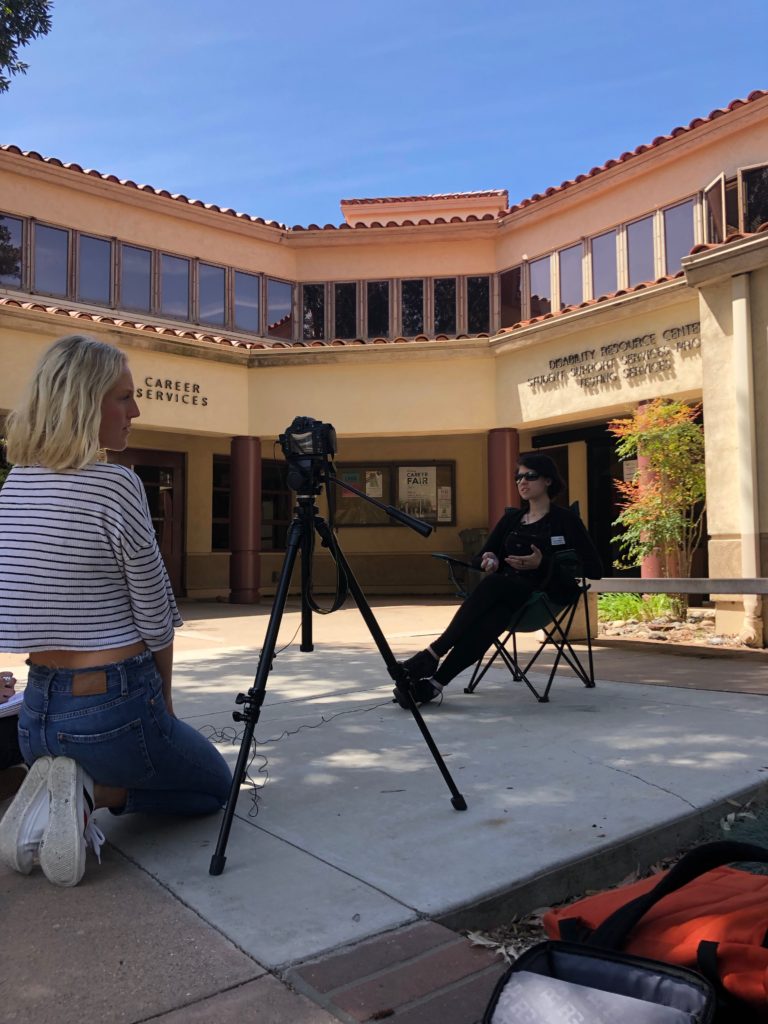 Emma checks on the camera angle during Jenny Peterson’s interview.

Yasi Arami, our interactive / photos team member, had never even held a camera before this project, and she did a fantastic job! Below are couple of the fantastic photos that she took during and after the interviews. 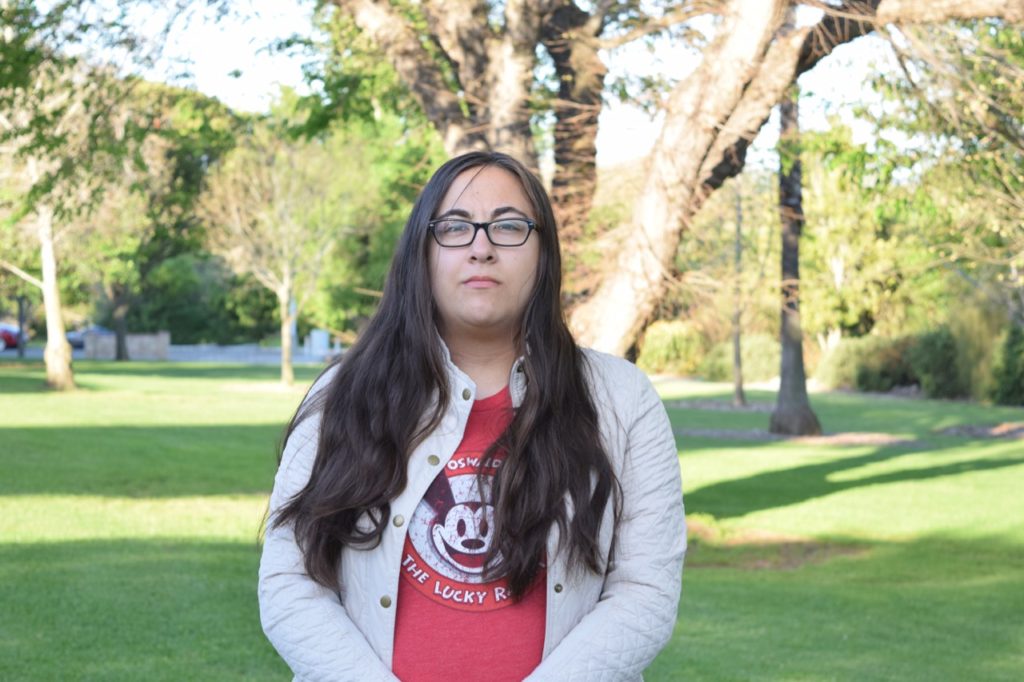 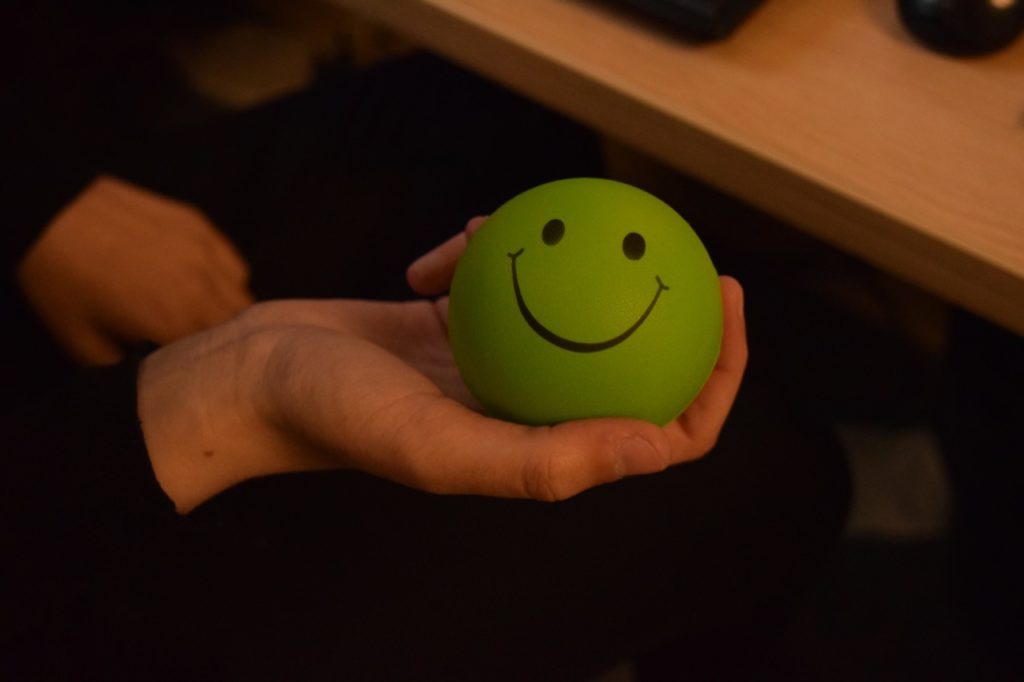 Some call this a stress ball, but for individuals with Autism, having something to do with their hands can help them focus.

Yasi is really pleased with this process and our work as a team, “I learned a lot about photography and loved the experience of meeting and hearing the stories of our sources,” said Arami.

Last but not least, Sophie Carnevale had the job of putting all this work into writing; she aimed to balance the emotional, empathetic and informational interviews we got. Before any of that, she had to make sure she was well-versed on what Autism is, how it affects academic and social development, and general facts about Autism spectrum disorder. Carnevale saw firsthand the difficulty in finding sources who were willing to open up, “It was tough to find people to be honest about such a potentially vulnerable topic but I think our sources understand the impact they can make through this story.” And she was right. Katie Whelan began the interview by talking to us about how much courage this interview took for her,

“I don’t really talk about [being Autistic] just because there’s sort of a fear that if people know that you’re Autistic that they’re going to treat you different than before.”

And that’s the reason why we chose to write this story! To work to flip the stigma around Autism at Cal Poly, and educate our community on the lives of incredible individuals.