The week before pitches were due Cal Poly had the biggest sporting event of the year when the Mustang faced UCSB Gauchos in a heated soccer match. Every year the main attraction of these games are lots and lots of tortillas that are thrown onto the field. This year there was a drastic change with lots and lots of individuals who attempted to “streak”- but were fully clothed. We all wanted to write about this but we didn’t even know what to title our story if the seven people who were arrested were technically not streakers because they were clothed. Our group then decided to look up what the definition of a streaker was when I asked, “what even is a streaker?”https://www.thefreedictionary.com/streaker After looking it up we saw many different definitions for it and decided that a streaker can either be naked or clothed because as shown above number 12 states “to run, go, or work rapidly”- which they did or number 14 which is “to make a sudden dash in public while naked, especially as a prank” according to dictionary.com.

Although there were many streakers, Primo Facchini, a Cal Poly Student said “I did not see the students run into the field at that time. I saw videos of the streaker on Snapchat. My initial reacting was its just another striker at a game and I thought it was pretty funny. The game was high energy the whole time since UCSB is our rival. I don’t think it changed the game much after that.” In this hyperlink you are able to watch a snap chat story yourself and see what is was like to be at the game. https://drive.google.com/drive/folders/1xJDTDWroXiNrdveKveNycUs28VHfejE_Our group thought that since this was such a big deal going on all around campus and there were many different opinions of it as well as many videos and pictures that we thought that it would be easy to get interviews- but we were wrong.

We initially wanted to focus on the streakers and where they ended up but we had to change our ideas in order to get all of our interviews and a successful story. The streakers were easy to spot at the game but hard to find who they were around campus. Mustang News wrote a story prior to ours coming out about the seven arrests but none of them mentioned names. Here is a link with the story if you would like to get some more information : http://mustangnews.net/one-goal-seven-arrests/.  We then thought that taking the advice of Kinesiology Professor Maurice and looking at how the players felt would be a good idea. The players were difficult to interview despite a few members of our group knowing a few of them. We quickly learned that public relations tactics are very much alive when one of the players opted out of an interview because we had to go through his publicist.

We  had to change our story angle again, Spenser Judd tunes in on the change of topics by saying that, “Even though we had to change our original story idea, we were able to quickly find a new angle once we got ahold of our sources.” We then decided to focus on staff such as UPD and athletic directors. Jarrod Urrutia shares how a great interview he had with the athletic director and how he helped bring the story together, “Until I got a very strong interview from the athletic director, I was unsure of how I would be able to bring a video together. When the reaction started coming in, so did the video.” We were running out of options and like being a big help to the athletic department he was also a big help to our story!

Another aspect that was surprising to us was how hard it was to get social media content. There was so much being posted but it was hard to go back and find by the time we got around to our story. Being able to add angles that we had not talked about before allowed us to be able to complete our story. Katie Patterson, who was in charge of that says, “I found it difficult to find successful multimedia components for our story; however, our story came together in a cohesive manner.”

We want to leave with you today that streaking might seem like a good idea at the time but is it worth the fines, jail time and possibly even become a registered sex offender?” According to the Shouse Law Group, students who choose to partake in streaking run the risk of being arrested under California Penal Code 314 PC. First convictions can result in misdemeanor penalties of up to six months in county prison and a fine of up to $1000. Any future offenses can lead to a felony with a prison sentence. People who are convicted for indecent exposure are also required to register for a minimum of ten years as a Tier one California sex offender.  It may seem like a good idea at the time, but think twice next time you think about running across the field and get close to jumping that fence.

Thank you and enjoy our story! 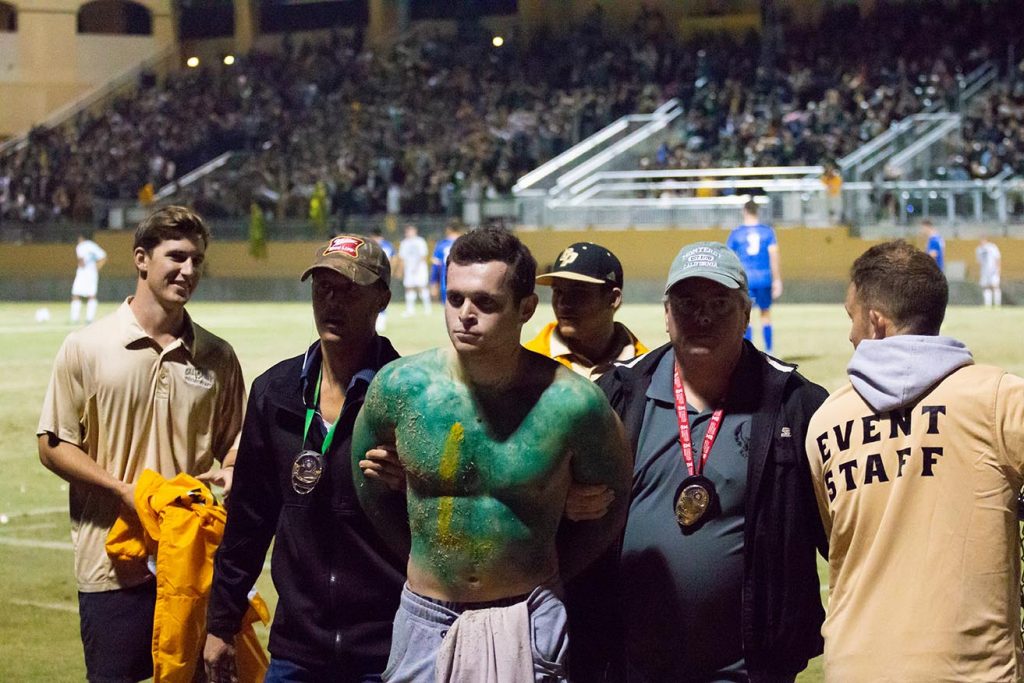