How we found the RFC 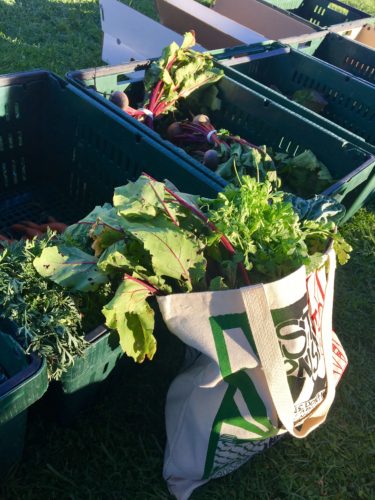 “It was a challenging experience for me because I was doing a platform that I’m not confident doing. So it took me a while to figure out the right angle for this story. Overall, people in the Real Food Collaborative were very
helpful in getting the information needed for this story,” said our writer Isel Longoria.

Our initial idea took a turn

We were amazed when we learned that the Real Food Collaborative not only grew their food at an organic farm on campus, but they also cooked it in an on campus kitchen and sold it on Dexter Lawn. They have a menu on their Facebook page, as well as pictures of the group cooking and selling their produce. It wasn’t until we met up with the group at the Cal Poly Food Day that we learned that they do not sell their food on campus anymore. This to us was a let down because we were so excited to interview them cooking and selling their food. We had brainstormed great b-roll and were hoping to get the reaction of people who love to buy their food on Dexter. 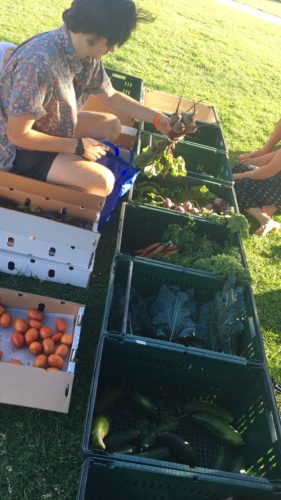 This was the moment we decided to change the angle of our story. We were no longer focusing on how the Real Food Collaborative grew and sold food on campus, but instead why they stopped and what they are doing for students now. We quickly learned that they started putting together and selling produce boxes to Cal Poly students. We wanted to find out how much they make and how much it costs to make them.

After enduring one of the hottest days at Cal Poly this year, we cooled down at Dexter Lawn in the afternoon with the Real Food Collaborative team. We got to see what they do in action and watch the RFL subscribers as they picked up their produce. The group brought about a dozen boxes of produce of all different kinds of vegetables that was just recently picked from the Cal Poly gardens. Their customers brought their own grocery bags and took one bunch or item from each box. They explained to us that they do this every 2 weeks and customers pay by the quarter.

“It was really cool getting to see what the collaborative does. Even though there wasn’t much to see visually, we made it work and got some good pictures” said Lauren Goff, who did our multimedia.

After sharing cooking ideas, we got to talk to the president of the Real Food Collaborative, Abby Ahlgrim, who gave us her definition of what it means to be a sustainable consumer. She said, “The Real Food Collaborative is a student group on campus and our mission is to create a community around and advocate for real, healthy, local, and sustainably and ethically sourced food for students on campus.” She outlined how large of an umbrella term “sustainable” is and how it ranges from climate change to political and social justice. She 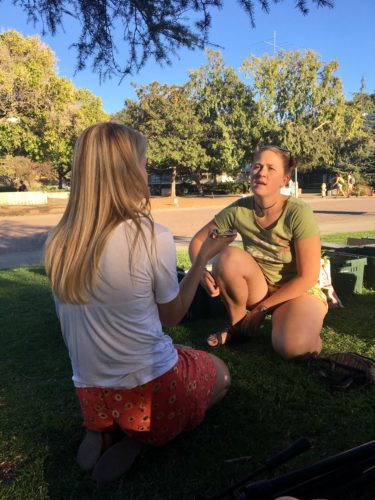 mentioned how all the members of the Real Food Collaborative are activists for ethical agricultural practices, healthy and local food choices, and the sustainability of our environment.

“The real food collaborative is a super important and sustainable organization that supports learn by doing, so spreading their story was really fun for me!” said Andie Di Matteo, our videographer. 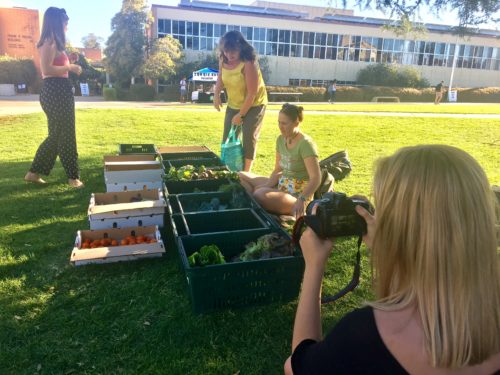 There’s more where that came from

When we first heard of the Real Food Collaborative we thought wow they are doing something we’ve never seen before. After doing some research we found out quickly that they are actually not the only group of people doing this in San Luis Obispo. There are many organizations on and off Cal Poly that share a mission to lower the ecological footprint in our town. Two groups we talked to that are off campus are called eatSLO and the SLO County Food System 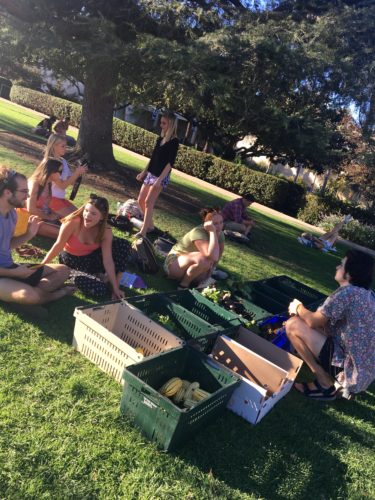 Another great source we found is Hunter Francis who is the founder and director of the Center for Sustainability on Cal Poly’s campus. We found that he was a great person to talk to because he is extremely involved with teaching the community how to be more sustainable consumers and where they can find local and organic foods.