Did you know the Cal Poly campus won 4 awards for sustainability practices this year? A few campus seniors here at Cal Poly wanted to get more information on what made our campus award-winning this year, the steps we have taken to get here and most importantly the people who got us to where we are today. These sustainability awards have not been reported on to this length yet, neither by campus news nor local or international news. That is why these students felt it was time to take it upon themselves to pull together the information, sources and material to highlight this feat; what is actually a very big deal for Cal Poly’s campus. Looking for more? Read on.

Ysabel Sullivan, as the public relations, strategy and engagement representative for the group, started her information search with the www.calpoly.edu archives and Mustang News archives for sustainability, awards, energy and energy efficiency. There was minimal information out on the topic to be found in articles other than what was posted by the Cal Poly Facilities Energy, Utilities, and Sustainability organization. There was an article posted in the Facility Services and Facilities Planning section on the solar farm being built to power over a quarter of the energy pumped through campus on a daily basis. Sullivan found great articles while compiling a backgrounder from the CAFES website on calpoly.edu as well as through the AFD. She confirmed that there is no information about the current awards run in stories by any other campus or local news organizations. 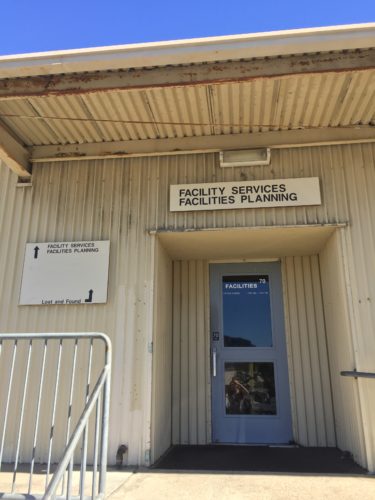 Sullivan reached out to the public with questions about the story, and got her best responses on Twitter. @CalPoly, the official Cal Poly university Twitter handle, responded to her inquiry giving her further information and links to the awards.

“It’s nice because we know our sources are very valid and credible, since the majority of digital information we are pulling from the Cal Poly .edu website itself rather than news articles, because there haven’t been any articles written about it yet. It will be a fresh story for the public. We are especially excited since we are doing it from the perspective of the people behind these awards,”  said Sullivan.

Jody Miller, the journalist behind the written portion of the story, contacted the sources whom Sullivan pointed to as representing leadership behind the awards. The team first met with Hunter Francis. Francis is director and founder of the Center for Sustainability in the College of Agriculture, Food and Environmental Sciences (CAFES) at Cal Poly. The primary goal of the Center is to assist the college in its goal to prepare leaders in sustainability through education, research, outreach, and through modeling sustainability through its operations. This was a great individual to talk to about more of the food and environmental sciences portions of the awards, where student organizations, food clubs and student-faculty collaborations got Cal Poly the extra hands on deck it needed to gain traction in these award fields.

Next, Dennis Elliot met with the team. Here, we got more information on a team of paid, student interns on Cal Poly’s campus who had a lot of impact on the awards won. This group was called the Green Campus team. Elliot is the director of Energy, Utilities and Sustainability as well as campus Sustainability Manager in Facility Services. Apart from managing the University’s energy, utilities, and sustainability efforts, Elliot enjoys working as the Green Campus staff advisor, and helping students with energy information for various class and senior projects. This was a great insight for the team to have as it was vastly different from the input of Francis, who focuses more on efforts within CAFES, a different college on the Cal Poly campus.

“It was interesting because we see the Green Campus flyers around, hear about the things they do in dorm rooms and campus, but it was awesome to see the people behind this influential group,” said Greg Llamas, the group videographer.

Lastly, we met with Kylee Singh, the sustainability coordinator on the Green Team. Singh got her masters at Cal Poly and graduated in 2013, and has worked with students in sustainability and energy efficiency on college campuses ever since. She has been following her heart in sustainability since she was an undergrad. 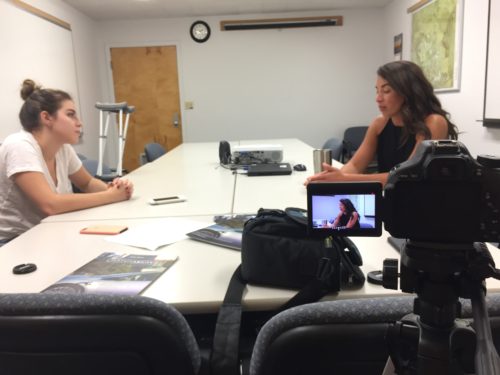 “I think my favorite part about this week’s story was getting to learn about each individual’s passion for sustainability – all of our sources are so dedicated to creating a better planet for our generation and for the future,” said Frances Mylod-Vargas, the team multimedia journalist and lead photographer.

Singh works primarily with students and working as an administrative voice of campus to answer student questions on the sustainability subject. One of the great points Singh had to make, was something that stuck with us and showed the importance of getting this story, a story that clearly hasn’t been told, out to an audience. 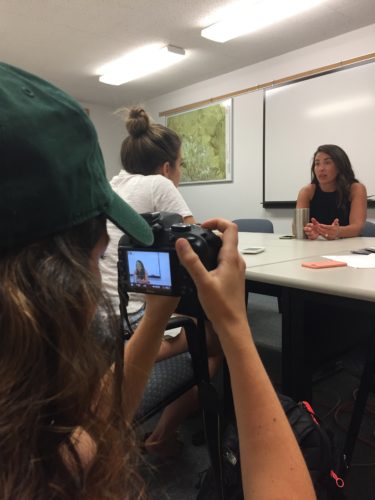 “What really sparked my fire to get into environmental preservation, environmental efforts and sustainability as my career for the rest of my life, is the kids I work with. The majority of my work is done with students, and I wouldn’t change it for a thing because these are the people that are key in making a real change in our planet,” Singh said in her final interview.