As of January 1, 2017, California law AB 1887 prohibits the use of state funds for travel to states whose laws discriminate against the LGBTQ+ community. What does this mean for Cal Poly students? CSU staff, faculty and students are unable to attend some events and conferences that would otherwise have been paid for by the CSU system.

Our story choice primarily came from our group members being personally affected by these restrictions. One morning, two of our group members who work for Mustang News overheard General Manager Paul Bittick speaking about the organization’s inability to attend the National College Media Convention in Dallas, TX.

“Every state has the right to make laws whether we agree with them or not. At the same time, we need to obey those laws and you can fight to change those laws. I just think it’s not right to create a law that limits some of the learning opportunities for students,” Bittick said.

While Mustang News employees were able to attend this conference in the past, this year the organization will have to pass due to the travel restrictions set forth by the state of California.

Coincidentally, Cal Poly students including ourselves received an email reminding us of revisions to the CSU Travel Policy only one week after beginning our project. 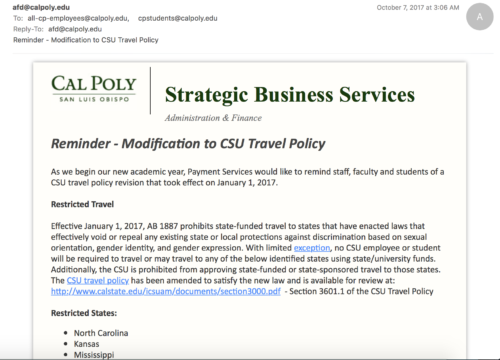 Nikki, the writer of this story, reached out to Cal Poly’s Queer Student Union, various clubs and organizations affected and the CSU administration to get their perspectives on this topic. She interviewed multiple sources while also taking into account the impact this has on the LGBTQ community.

“I wanted to focus on what’s being done about this currently. We all know the travel policy is in place, but is it working? Is this changing attitudes towards the LGBTQ community? I did not want to forget those voices, or for them to get swept under the rug just because this inconveniences everyone,” Nikki said.

Hannah compiled a list of clubs that had somehow been affected by the restrictions. She created a web-like infographic that shows some branches of clubs as well as each club that we were able to get in contact with.

In addition, she created a short info video that can be posted on social media to inform viewers of the new travel restrictions that were put in place.

“I learned about this story through personal experience and from hearing about other organizations not being able to attend conferences and competitions because of the ban,” Hannah said. “Personally, I was not able to attend one of the biggest journalism conferences of the year so I knew it was only appropriate to cover the story to inform our audience.” 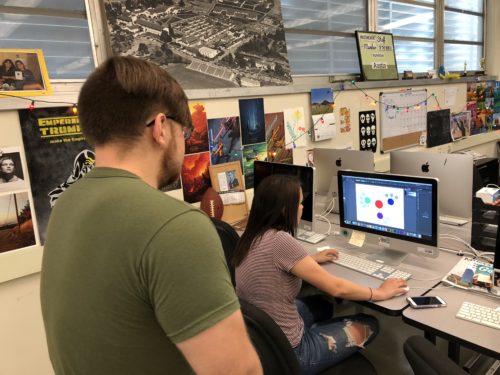 Hayley reached out to Cal Poly students and parents on Facebook to receive input, and got responses from a few clubs that had been affected by AB 1887. These clubs were also implemented into Hannah’s infographic.

“It was really interesting to see how many students have been affected by this law. We only got in contact with a few sources, but the responses would be endless if we had time to reach out to every on-campus organization,” Hayley said.

One was Society of Women Engineers who would have been unable to attend the National SWE Conference in Austin, TX if they hadn’t submitted their paperwork before the new states, including Texas, were added.

Cal Poly’s Triathlon Team found a loophole in the system and plan on flying into Georgia for USA Triathlon Collegiate Club Nationals in Tuscaloosa, AL. They are finding ways around paying for a hotel so that their funding for housing does not pay the state of Alabama by hotel fees.

A student in Cal Poly’s club WISH (Women Involved in Software and Hardware) also reached out, saying she may be unable to attend the Grace Hopper Celebration in Houston, TX next year.

Within our time frame, we reached out to multiple students and faculty who will be directly affected by this law, proving this story to be timely.