Cal Poly students are currently waiting in anticipation for the reveal of the new housing complex, scheduled for completion in Fall 2018. While students wait for the construction fencing to be taken down and for the last touches of paint to be added, there is an exciting story unfolding in the present, not just in the future during the grand opening.

The new dorms currently under construction are to be named after the Northern Chumash tribe. By naming the dorms after the Chumash, the intent is to honor the native lands upon which the dorms are being constructed and instill respect for the historical culture among the new Freshman class.

Although the dorms are scheduled for completion this Fall, there is still important work to be done. Communicating both the importance and meaning of the Chumash language to a Freshman class of 1,475 thousand students is no easy undertaking, and the Cal Poly team involved in the housing project have strategic work.

“With such a huge project, it was really important to us that we got right to the source,” said Reilly Roberts, Public Relations lead. “After meeting with multiple sources, we finally got connected to the Cal Poly team that made management decisions for the housing project.”

Our team of student journalists at Mustang News met with Executive Director of University Housing, Jo Campbell, to learn about her team’s behind-the-scenes efforts being made towards the creation of the new dorms honoring the Chumash.

Nestled in between the South Mountain Residence Halls, sits Campbell’s headquarters at the University Housing office. Upon walking inside, there was an interactive exhibit featuring the yakʔityutyu residential community. A three dimensional model depicts the dorm layout, with sound machines attached to each building that play the pronunciation of each dorm name when pushed.

The visual sound board sparked some inspiration for our Interactive lead, Navid Golemohammadi. “One of the best ways to show how the new housing project is going to affect campus is through visually displaying how the change will shape the future student body’s perception of the native names given to each new dorm,” said Golemohammadi. 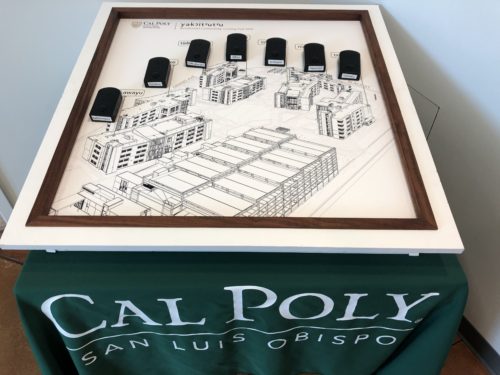 This was our first introduction as a team to the efforts being made to educate the Cal Poly community to the Chumash culture. However our lead writer, Erica Hudson, was already well versed in the Chumash cultural history. “For our story, I did my own background research on the history of the Northern Chumash people to help better understand their culture,” Hudson said. “For this, I read news articles already published on the topic, as well as various historical articles on the Chumash people throughout California. I also attended interviews and reached out to involved parties with the project for additional interviews.”

After experimenting with the sound board, we began our interview with Jo Campbell. Our audio/visual lead Mandie Geller set up mic equipment and her tripod, then the camera started rolling. “As the videographer, it was helpful to have planned out the interview questions in advance, so that during the interview I knew whether to make a tighter shot or wide angle shot in anticipation of their response to those questions,” Geller explained. 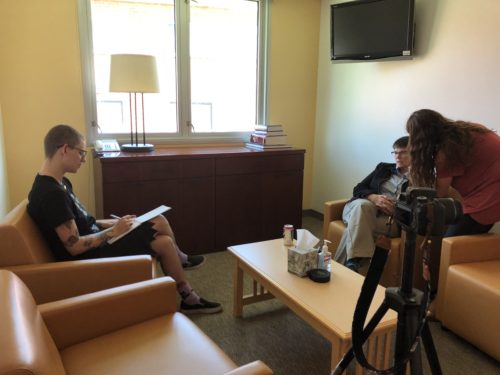 To Geller’s surprise, her camera flashed a “low battery” symbol halfway through the interview. We listened even more attentively, hanging onto Campbell’s every word in case the camera died.

It was at this point that we learned perhaps the most interesting fact of the interview. Campbell revealed that prior to the construction of the new dorms, the Chumash language had never been written down before, it was only passed down orally.

“We are working with a linguist on campus. Because you can’t use some of the symbols on a typical keyboard,” Campbell said. “There are lots of systems on campus that do not support these characters, so how do we figure all that out logistically?”

From linguists to education outreach, there is so much more depth to preparing the new residence halls than only construction. After the team’s interview process, we felt even more passionate about the project and amazed by the richness of the Chumash culture.