As previously mentioned in this blog post written by my fellow teammate Lexy Solomon, working on this story was a challenging for a few reasons— a lot of the conversations were sensitive and we had to be mindful in our approach, and organizing over 20 interviews with students and faculty is tedious work.

“It has been a challenge getting in contact with sources from all cultural commencements,” said Victoria Howland. “As journalists, my team and I are working very hard gather accurate information regarding each culture to avoid misrepresentation.”

However, this story allowed our team to take part in conversations about extremely important topics on this campus.

“This story holds so much value to me,” said Sophie Kelly. “I feel like we have a large duty as a group to respectfully and accurately cover each individual cultural commencement ceremony, attendees and the traditions involved within each.”

Through our interviews and interactions with staff and faculty, we very quickly learned how important this story was for Cal Poly’s campus. Nearly every person we reached out to was grateful that we were covering their individual cultural ceremonies since that hasn’t been done before.

At the Chicano and Latino Commencement meeting, Lexy and I gathered stories from students about how their culture has impacted their Cal Poly experience, and the responses were heartwarming.

Psychology Senior Yvette Solano comes from a small, predominantly Hispanic town in San Diego, and coming to Cal Poly her Freshman year was a major shock.

“Coming to Cal Poly which is not too diverse is definitely shocking at the beginning,” said Solano. “But it only helped me embrace my culture even more.”

Many students including Solano told stories about how their families supported them through their time at Cal Poly, and how much the cultural ceremony means to them.

“I’m proud of where I’m from — not only where I was born, but where my parents are from,” said Solano. “I’m proud of the sacrifices they’ve made to allow me to be here, so it’s all for them.”

Financial support from the university

During my interview with Ethnic Studies Assistant Professor Jenell Navarro, the topic of funding came up. She said that although the university supplies a certain amount of money for the event, the budget isn’t big enough to include every aspect of the ceremony.

“There’s a portion of the budget that comes from the president’s office for each of the commencements, and that did increase this year,” said Navarro. “But it still didn’t pay for the whole ceremony.”

According to Navarro, the American Indian and Indigenous Commencement ceremony received additional funding from the American Indian Faculty Staff Association and Career Services. In addition, University Housing paid for the graduates’ blankets for the ceremony to represent the students and their families, as well as commemorate the Chumash naming of the new Student Housing South.

“It’s always kind of a hustle to come up with the funding for the event,” said Navarro. “I would be great if we could write out our budget and give it to the University Cultural Commencement committee.”

Hope for the future

This was the first year that Student Affairs sent an email about the Cultural Commencement ceremonies to every student. This makes us hopeful that the campus will continue to pursue equal representation for marginalized groups on campus. 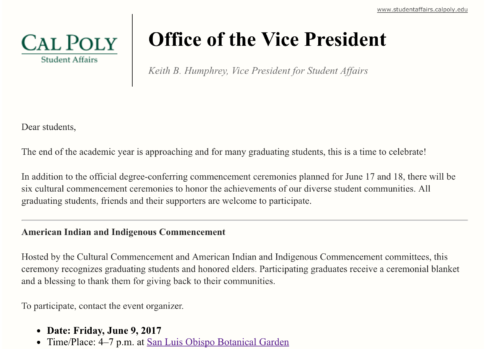 After working on this project for weeks and getting to hear stories from students and commencement coordinators, we hope that this inspired student media to cover different cultural groups more often.

“I think this story has opened the door for a lot of discussion about the different cultural groups on campus,” said Lexy Solomon. “It has been a pleasure getting to speak to a wider variety of people and learn how their cultures have shaped their college experience.”