Students and on-campus organizations have found themselves cancelling or altering academic and athletic events in response to a piece of legislation that took effect at the beginning of this year.

Starting Jan. 1, 2017, California banned the use of state funds for travel to eight LGBTQ-discriminating states, including Alabama, Kansas, Kentucky, Mississippi, North Carolina, South Dakota, Tennessee and Texas. The California State University (CSU) system has been working with the original author of the bill to adjust the legislation so that it does not as greatly impact athletic or academic opportunities for students.

Until revisions are made to the bill, Cal Poly students and staff are forced to adjust their plans and explore private funding options for their trips.

This is a video caption.

Who has been affected?

The National Organization of Minority Architects (NOMA) had its annual conference in Houston, Texas from October 11 to 14. Seven to 10 Cal Poly students were slated to go from the university chapter, NOMAS. But because of the restrictions, none of the club members were able to attend.

According to NOMAS member Colin Ridgley, the conference typically provides students with networking opportunities that lead to internships, as well the ability to participate in a design competition.

“It’s just personal losses, missed opportunities. There’s a lot of companies we met last year that I think were expecting us to be there again and we missed out on those connections, but there was nothing serious that impacted the club,” Ridgley said.

“Nobody would be able to do anything like this without the club and without funding from the school.” Colin Ridgley

NOMAS was informed with short notice, leaving them unable to pay for the conference, which Ridgley said costs as much as $700 per person. Architecture senior and president of the club Tunmi Da Silva struggled to collect private funding for the trip.

“The conference is so essential to membership; it gets people excited to participate in NOMA, a conference they have access to as minority students,” Da Silva said. “We basically had a month and a half to find five thousand dollars, so we were unable to go.”

Though Cal Poly Triathlon found themselves in a similar situation, they found loopholes around the restrictions, allowing them to still attend their Nationals competition in Tuscaloosa, AL. Athletes had no barriers when registering since the fees went to USA Triathlon headquarters in Colorado. They also decided to fly into Georgia, drive to Alabama and use private funding for other expenses.

“Essentially USA Triathlon set up a race with a two-year contract, so they couldn’t move it.” Cal Poly Triathlon secretary Rachel Draffen said. “We can’t book a hotel there, we can’t purchase food there, we can’t really get anything there that’ll give us receipts from Alabama that we want to get reimbursed from the school.”

Students are not the only ones affected. Vice President of Student Affairs Keith Humphrey had been hoping to return to the American College Personnel Association’s (ACPA) annual conference in 2018. Since it will be held in Houston, TX, finding a way to attend will be difficult.

“This is particularly difficult for me because I have gone to ACPA in the past,” Humphrey said. “I believe in [what] California is doing, but I’m caught in a challenging position. I want to attend to promote student and social justice, but I want to uphold the law.” 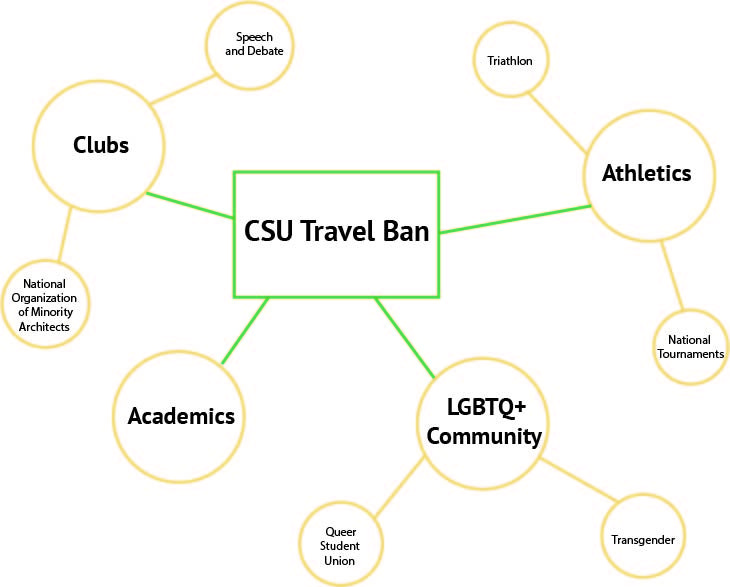 On Jan. 1, 2017, California’s Assembly Bill No. 1887 took effect, prohibiting the state from “supporting or financing discrimination against lesbian, gay, bisexual and transgender people.” 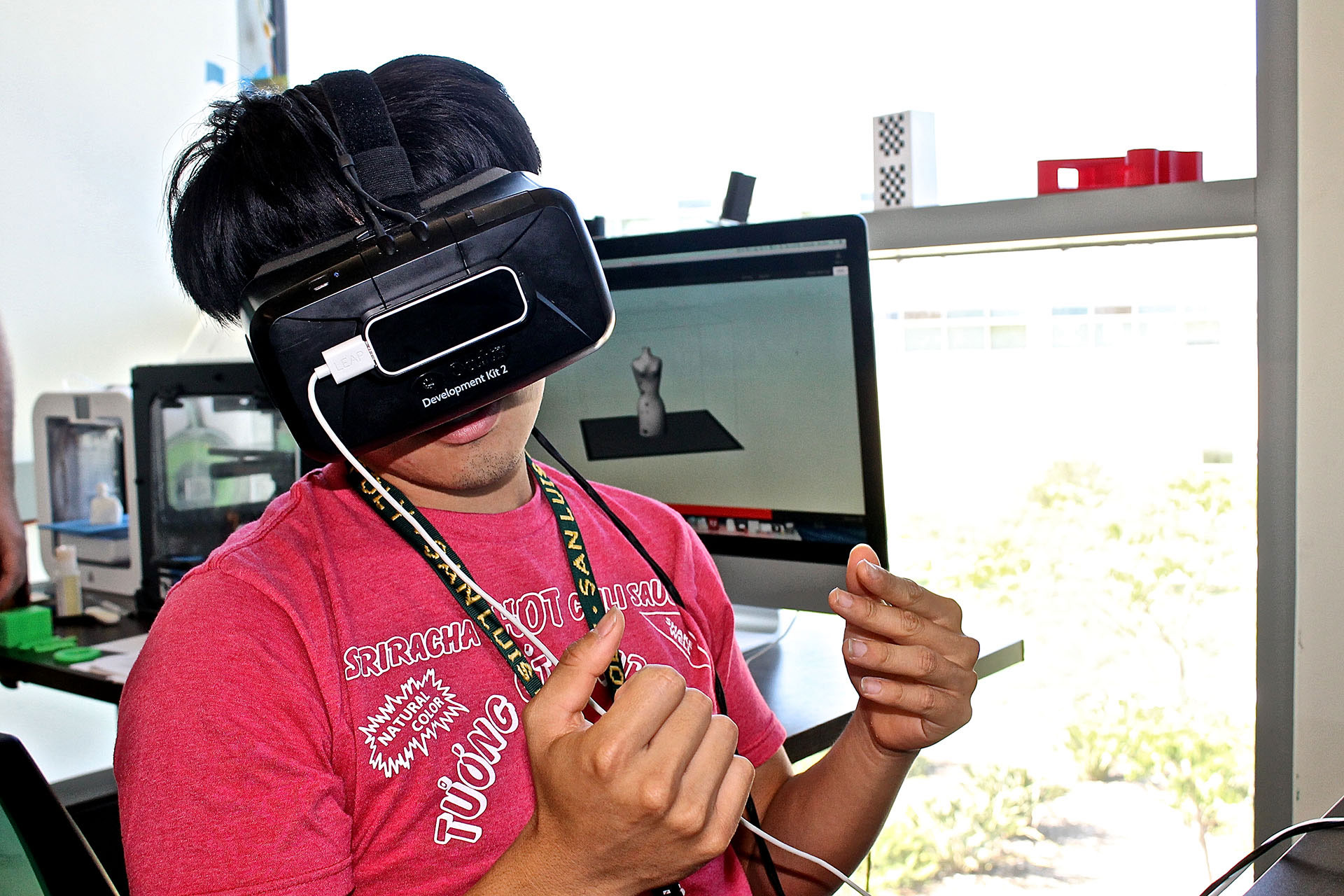 Eight states including Alabama, Kansas, Kentucky, Mississippi, North Carolina, South Dakota, Tennessee and Texas have enacted laws that discriminate based on sexuality, gender identity or gender expression. Any Cal Poly program planning on traveling to these states is prohibited from using state funds to financially support their trip.

Unless contractual obligations were made before Jan. 1, Cal Poly students, staff and faculty have to either privately support their travels to those states or cancel trips entirely.

The CSU office has been abuzz with questions and discussions on how to proceed with legislation that better serves students. Assistant Vice Chancellor Mary Ek oversees CSU travel policies and is creating conversation surrounding how to best accommodate academic and athletic needs, since students don’t necessarily have a say in where the events will be held.

In order to reintroduce unrestricted travel for CSU students and employees, changes will need to be made to the legislation. Once legislative drafts are written, the CSU can make comments before it is passed with revisions. Currently, the original author of the legislation is undergoing a process to alter the original bill.

“My understanding is that the legislator who wrote the bill originally is working on some changes to reflect either a date change in terms of the effective date of Jan. 1, 2017 and/or ability for some leeway there for student organizations who need to travel for athletics or for competitions and those sorts of things,” Ek said.

LGBTQ students have mixed viewpoints of the bill. Alison O’Neill, a communications senior and member of Cal Poly’s Debate program, identifies as a transgender man and believes that it may hamper opportunities for Cal Poly students.

“I appreciate the motivation behind it, and hope that it will cause positive changes, but it also hampers football teams and I worry that they will turn people against [us],” O’Neill said. “Once you in any way inconvenience football teams, people get furious. It might also hinder opportunities for students and faculty to present their research.”

For other LGBTQ community members, the bill has made positive waves. Matt Klepfer, a political science senior and organizer for Cal Poly’s Queer Student Union (QSU), is supportive of California’s travel restrictions because of the effectiveness of economic boycotts on changing discriminatory laws. He stands in solidarity with any LGBTQ-identified persons within the banned states.

“Take Georgia, for example. They almost made it to the list, but big companies such as Disney were prepared to pull filming out of the state if they went through with anti-LGBTQ legislation. That would dramatically affect their economy,” Klepfer said. “This is sending the message that [our] rights are important and can no longer be ignored.”

In regards to questions surrounding the restrictions, Ek suggests that organizations, faculty and students go to their campus law department first and then call the Chancellor’s office. Most questions Ek receives are about whether or not a certain type of funding is allowed to use for travel to the banned states.